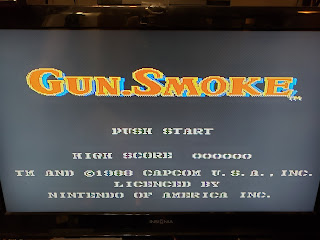 Intro:
An immersive experience set in the late 1800s? The time of cowboys, cattle drives, and shoot outs? Are we talking Red Dead Redemption 2?
No!
It's old school time and I'm spending a little time in the old west this week with the Capcom shoot'em up classic Gun.Smoke!
Now, upfront, I want to say it took me years to realize that Gun.Smoke actually is a top down shoot'em up. (Late to the party, I know) In fact, there are several games that I started to play better as an adult that I didn't do so well at as a kid because I was lost in the astetics of the games. Stuff from Dino Riki to Dragon Spirit had me half "fooled" as a kid that they were something other than their true nature. An overhead shoot'em up. Not that I dislike those, but as a kid (and as an adult) I realize my own gaming limitations. I can enjoy a game like Gradius or Life Force, even when I'm terrible at it. That said, I still don't do that well at them.
As a kid though, I was more or less given to avoid all shoot'em ups. I was halfway decent at Gradius and Life Force, so I would occasionally rent them if there were no other options. (Remember, the cardinal rule as a kid was never leave the video store empty handed.) If there were games like Castlevania or Mega Man 3 on the shelf, I was gonna pass those games with the space ships and UFOs on them right up. I realize now that I missed out on some quality stuff because I took this idea with me well into 2000's. This isn't to say I never rented shoot'em ups, just that they never really grabbed my attention. Decades later, I'm grateful for the Retro Gamer Swap meets and sites like eBay so I have a chance to pick up those skipped games now that I'm adult with a bit of spending money of my own.
So, a bit of background on me. I loved westerns as a kid, and quite frankly I still love them as an adult.  The Good, The Bad, and The Ugly and Fistful of Dollars are required movie watching in my opinion. I still love reading Louis' L'amour novels as much as I loved listening to them on tape when I was a kid. So naturally when a game like Gun.Smoke was available to rent, I grabbed that game happily. Never realizing I had picked up a shoot'em up with a western coating instead of space ships.
So, does the game still hold up years later?
Draw!...
...Up a chair and let me tell you a bit about the game first.
Gameplay/Control: 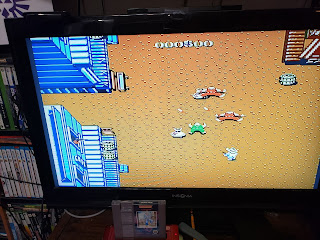 With endless bullets and your trusty horse, it's up to you to bring leaden justice to the old west. Using wanted posters as your guide it's time to saddle up. Oh. A quick note on those wanted posters, unless you find them or buy them, you will endlessly loop the stage you are currently on. The necessity of buying the wanted posters and the chance to buy power ups (and pause the game of course) are the primary ways in which this version of Gun.Smoke varies from the original arcade game. You get points/money for every bad guy you take down and some of them drop money bags which gets you those extra points needed to buy the wanted poster should you not find its hiding place in the stage. I kinda have a love/hate relationship with this mechanic. 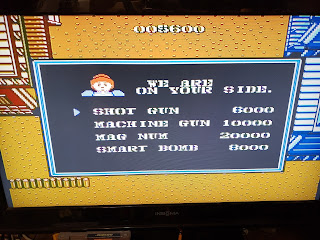 The addition of shops where you can buy the poster, powered up weapons, extra ammo, and even a horse among other things is great. As a kid, I appreciated that the game was much easier to get into. I liked getting the shot gun or machine gun power ups. Of course, as an adult I see it for what it is; basically the "power up your spaceship" deal from other shooters. This realization in no way diminishes my fondness for the way the power ups are integrated into the game while keeping with the western theme.
However, I remember getting a little bored looping a stage endlessly. Sure, you can hunt down the wanted poster for free in each stage, but if you missed the wanted poster it was the same as if you had just decided to get more money and buy it instead. I don't know that the NES game would have had the programming power to make the game offer the shopkeepers selling the poster at a cheaper price if you missed where it was hidden or have them appear more often or something; but I sometimes wish it was there never-the-less.
As for the stages themselves, each one offers an array of fun and familiar old west locations from small, dusty towns to railroad tracks in the desert that occasionally passes a lonely station or two. Great stuff.
The controls still hold up pretty well. Just like a space shooter, you start out a little slow and under powered until you grab boots to boost your speed and shotgun icons to upgrade your weapon reach and rate. Again, as a kid I didn't see this in the same as a thing like Gradius. I was in the old west, gearing up to take down a gang of rustlin' outlaws ridin' fer trouble.
Ya know?
Sound Design/Music:
If you want to hear the soundtrack for Gun.Smoke, please follow this link here for the soundtrack. Capcom offers the usual mix of fun arcade sounding beats with a western flair. True, the NES didn't have the same capabilities as the arcade proper, but it still has quality to it that evokes a feel reminiscent of Ghost Riders in the Sky or something Johnny Cash might have written if he worked on a game sound track. Seriously, go to YouTube and hunt down some of the covers of the main theme, Hicksville, and you'll see what I mean.
In fact, go check this cover of Hicksville right now. It's just fantastic, and when you hear it covered in this way, you get even more of the western feel that this tune has.
In so far as sound design goes, Capcom again got it just right for this one. There are limitations in the NES, but the best companies (at least back in the day) knew how to make the most out of a few synthesized sounds. Gun shots, bad guy yells, horse clip clops are all done in a reasonably well way and still hold up today.
Conclusion:
As I mentioned earlier, I can see as an adult I did myself a disservice by not trying out more shoot'em ups. Yeah, the majority of overhead shooters you're going to find yourself piloting a space ship, fighting a slew of ships to save the planet, or galaxy, or all of space and time.
You get the idea.
I loved this game back in the day, I liked playing it as part of a Capcom collection that I have for the PS2--but that was direct arcade port. I finally picked up this NES port both as an excuse for this review, and because I recalled that I connected more with this version. Boy did I ever. It was worth popping into the local video game store to grab this one. I played for hours just for this review...because it's still a double-barreled blast of western nostalgia.
Posted by The Blue Jester at 12:12 AM 1 comment: