From the dank shadows of an alleyway, his fedora pulled low, a mysterious figure shrouds himself in a trench coat while searching the streets for answers.

"Where am I and what's going on," were the first things that came to his mind, shortly followed by a more pressing question, "Who am I?"

No, this isn't some golden age Hollywood film noir, this is Deja Vu by Kemco/Seika, but boy do they try--and succeed--on selling you on that film noir feel.  The setting and surrounding murder mystery and Ace Harding's missing memory has the hallmarks you would get with a classic Humphrey Bogart film.  But setting and gameplay alone doesn't always make a game, nor does it always help create the tone that a developer hopes to strike. You need the right combination of elements, and since this is Midweek Music Box, naturally I'm going to some tune talking.

First, take listen to this:

Great stuff, right?  I mean, we're talking chip tunes here, but they still manage to capture the same slow jazz feel of the 1930's.  It sells you on the era that this game was set.  True, the graphics in the game are bright, by necessity or you wouldn't be able to play.  Also true that you couldn't synthesize a trumpet or piano onto an NES cart back in the day (not well that is), but as is often the case with this era of gaming, what the composers and programmers managed to do still deserves respect.  Using a few simple chords, they help sell the feeling of a hard-boiled detective looking to fight crime, knock about thugs, and save (pardon the term) "dames."

Now, in all fairness I don't feel that the soundtrack to Deja Vu is as well balanced as it could be.  Ace Harding's theme feels a tad too jaunty and Kemco always did manage to make their, "You're in imminent danger!  Do something quick," music a tad on the annoying side.  It was true in Shadowgate, true in Uninvited, and it's true here with Deja Vu.  But man oh man do they know how to open a show.  Yeah, it's a point-and-click adventure, but thanks to several of the slow jazz tunes you really get the feeling that you're making your way through a classic hard-boiled detective novel or a film that would've starred Humphrey Bogart.

Most times during Midweek Music Box, I like to recommend music that has a quality to it that makes you want to pop it on your iPod or mobile device of choice.  Sometimes though, a tune doesn't carry over from the game, but still has such merit that it deserves a nod for what it has accomplished.  To send us off, here's a trailer for a classic Bogart film.   Watch it and you will likely see what I mean when I say that Deja Vu's music really helps capture the tone it was going for.

Posted by The Blue Jester at 4:13 PM No comments: 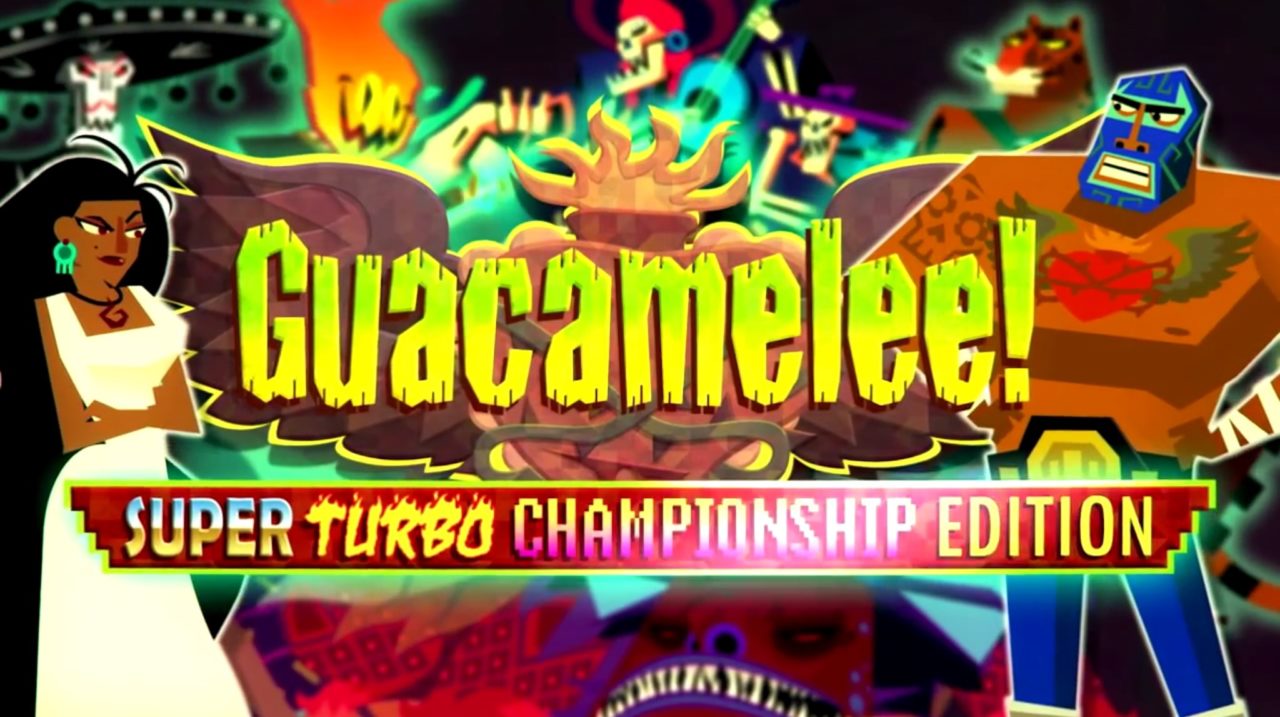 The Good, The Bad, and The Ugly ranks up there as one of my top five favorite films of all time.  It has a great story, great acting, and of course, great music.  When I first played Guacamelee! Super Turbo Championship Edition there were so many tunes in the game that instantly reminded me of the famous Clint Eastwood western, I immediately fell in love with the soundtrack.  Guacamelee's music captures not only the goofy nature of the story, that of magically powered Luchador battling the ruler of the land of the dead and his skeletal hordes, but it manages to do so in a way that makes it almost impossible not to smile.

From the understated trumpet sounds and gentle guitar strums of the mariachi music that plays for the town Pueblucho:

To the action packed western and mariachi fusion music for the Forest del Chivo:

A generic mariachi soundtrack would have left you wondering why you just never felt engaged in the game despite its colorful backdrops and quirky story.  Too much pizzazz and it would have seemed too glitzy and too cheesy; that's fine for an average game, but nothing that would stay with you once the game was powered off.  But the soundtrack for Guacamelee es muy fantastico!

Rom Di Prisco and Peter Chapman deserve an award for creating such a fun and infectious set of tunes.  Di Prisco  and Chapman successfully fused high-energy digital music with mariachi and western movie undertones in a way that compliments everything from the quirky towns to the metroidvania-esque action segments within the game.  These elements and more make the soundtrack a must have for any game enthusiast and fan of fun music in general.

If you click here it will take you to a link so you can purchase the soundtrack.  Or, if you prefer, you can hunt it down on iTunes, and you should.  I love using some of the faster tracks for when I'm jogging or working out, and the slower tunes for towns make pleasant background music for just sitting around the house, or for when I'm writing, like now.

Sure I'm gushing a bit about Guacamelee's music, but the composers should get their due.  They not only successfully brought the world of Guacamelee to life, but gave it a voice and heart all its own.  I hope this game gets a sequel because hearing another set of tunes in the same vein as the original would be a pure delight.

Posted by The Blue Jester at 2:45 PM No comments: Cartoonish, colorful characters race across an ever changing technicolor landscape running, leaping, and occasionally smacking each other into traps, pits, and various obstacles--on a quest for glory, trophies, and the fastest time possible.  13AM Games leaps into the game scene with a "colorful" entry that boasts a wide variety of characters, modes, and challenges.  So, does the game shine as brightly as the colors within?  Or does the end result leave you wishing for a wold of black and white?

There's a bit of a learning curve involved with some of the controls for Runbow.  Not to say that they are difficult to master or that there's too much going on; just that with all the action on screen in the multiplayer mode you can lose what button you pressed last and end up dead before you realize it.  Aside from that it controls tightly enough, which is exactly what you need in a game where dying over and over is to be expected.

For a game where the characters are various hues of one color and have a certain paper-puppet quality to them; Runbow feels like there's more going on in terms of style and graphics.  The sharp angles and lack of curved surfaces make the whole thing like a Tim Burton design--but with colors of the rainbow rather than the typical black, white, and gray of a Burton film.  The simplicity not only lends a unique look, but I'd wager it's what helps the animation flow smoothly in multiplayer.  The "guest" runners that appear (such as Commander Video and Shovel Knight for starters) are also adapted to the style of the game and are pleasant to look at.  The graphics are crisp and as I mentioned before, moved smoothly even with 8 players.  I think this is pretty impressive for an indie game.

The jumps and punches in Runbow have a nice, bright sound to them, the "poof" type noise when you die don't reach the level of aggravation you might expect from a game that allows numerous deaths.  They are pleasant to hear and do the job they need to do.  Even the power ups are nice to hear.

Dan Rodrigues deserves credit for giving Runbow a jazzy and energetic soundtrack whose pace never feels frenetic but hits the right tone every time.  From the bombastic trumpets and heavy drums of Behemoth mode to the fast paced orchestral Latin and jazz fusion of Adventure mode--the soundtrack never disappoints. You truly get that big band feel. I like a game with a simple visual style and an orchestral soundtrack.  I've said this before about other games, but really, a blend of simple visuals and complex music gives a game sense of weight.  You often see games with simpler graphics try to imitate 8 bit or 16 bit music with varying degrees of success.  Bringing an orchestral sound almost never fails to impress.  It's well worth your time to download the soundtrack as the composer Rodrigues did such an excellent job making the job unique and a real joy to hear.

You and your opponents race across a technicolor landscape in mad dash to see who can reach the trophy at the level's end first.  Each level consists of various pits and traps which players can avoid by making use of single color platforms; however, the real challenge doesn't come in merely avoiding falling to your doom and getting to the trophy first.  During the race, the single color background constantly gets replaced by new colors whooshing across; adding and subtracting platforms of similar color.  Standing on a yellow platform above spikes and see yellow coming?  Better move fast to the blue platform above the pit, but don't linger too long because a wave of blue is on the horizon.  This constant change of color forces you to think fast, jump accurately, and relentlessly move forward.  Despite the need to continually move, the pacing never gets too frantic, and there are plenty of power ups and level variation to keep you playing for hours.  It's really impressive playing online as there was virtually no slow down, even when you have a full compliment of 8 players and I feel for a smaller company this is quite an accomplishment.  I've played other online multiplayer games produced by big companies that didn't have the smoothness that Runbow had.

Not in the mood to play with others nearby or online?  Can't scrape together enough friends to make for an interesting race?  Not a problem as the game offers a nice Adventure/Story mode that makes nice use of simple cut scenes, or the Behemoth mode where you move along inside the belly of a beast, progressing as far and fast as you can with no saves.

The only real fault I find with the game comes from something that's meant as a feature.  Whether you play local or online multiplayer there are times gameplay can get a bit confusing.  So much happens at once on screen that you can easily lose your character in the melee.  It takes a bit of getting used to all the action on screen.  When you do grow accostomed to it though, it makes for some really exciting gameplay.

There's a richness to Runbow that I deeply appreciate.  The game offers so much in terms of unlockable characters, game modes, and options--it feels like a game that could have easily gotten a physical release and deserves one at some point in the future.  Oftentimes with a game that offers multiplayer but is independent or not a full-blown AAA title, you can see the game having a fairly short lifespan when it comes to players doing interaction online.  I hope this isn't the case for Runbow.   Runbow by 13AM Games takes the platform genre, tosses in a dash of runner, and the end result is a pleasant and challenging twist in a world of ever-changing color palettes.