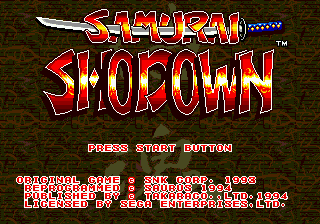 So the main reason I wasn't into fighting games was because I was terrible at them. I thought it best to lead with that because the times I rented fighting games were few and far between. If I was only so-so at shoot'em ups, I was even worse at fighting games. Occasionally I'd plunk a quarter into an arcade cabinet thinking somehow I'd manage to mash the buttons in the right order so that I'd fire off a special move or beat back the computer opponent.

Usually I'd find myself defeated in short order and well with in a minute of having spent the quarter.  So why exactly would I go out of my way to have rented a game like this in the first place? I guess the eternal foolish hope that somehow by getting better at one fighting game I would instantly "figure out" other fighting games.

So how did I fair when I rented it, and how do things look to me now?

I always thought the game bore a strong resemblance to the Street Fighter series, and that opinion hasn't really changed now that I own it years later. You have varied, animated backgrounds, a cast of eclectic and cartoonish characters, and each character has on screen "text taunt" you see when you lose. I suppose this was to make you feel a need to prove the computer wrong and pop in a another character. Well, without the cabinet around to make me think I was a mere quarter away from victory, I'm only a continue away, and somehow that makes me a little sad. But I'll explain that part later.

As far as sound goes it's filled with the typical grunts, "oofs" and yells. punch and kick effects which you would expect a game like this to have. The music does a great job setting the tone and atmosphere of the game. In particular, there's the character select theme.


Every time I hear the character select music it leaves me feeling like I should have a katana or something ready to pull out from a sheath on my back or by my side. Then again, as I'm not a samurai warrior and would likely get cut to ribbons by a true warrior, it's probably for the best that I don't have a katana nearby.

Do games like this really have a story? I mean, I get with Mortal Kombat you are fighting to keep a portal from opening or some-such thing, Here, it's more like your typical tournament fare.  You fight through the various opponents one by one until you defeat them all--or at least you probably do. Me? I lose after the first or second fight, unable to power through the opponents. I blame this entirely on my own lack of skill as the control for the characters feels responsive enough in its own right. Sometimes I admit though the control doesn't feel quite as tight as Capcom's Street Fighter series, but again, as I always have a bit of difficulty with fighting games this doesn't surprise me.

Why did this ever get rented back in the day? Or at least, why did I ever rent this back in the day? Maybe I thought since I wouldn't have to drop a roll of quarters I'd eventually get the hang of it and beat it like I had with other game rentals. Well, I guess when it came to fighting games at least, whether a ported home version or the in arcade version, I did nothing but lose rounds, and patience. I'm reasonably certain this was one of those games where I played it only a few times before just giving up on it entirely. What was I thinking renting a game like this again--let alone buying it later as an adult?  I played it again for this review, thinking maybe I was just a silly kid who couldn't get the hang of things--but no, I'm a silly adult as well, still unable to get the hang of things. It's a good game overall, and I like having added it to my collection...even if I don't ever get much past the character select screen.
Posted by The Blue Jester at 12:34 AM