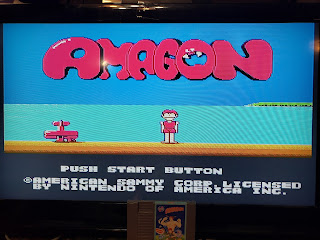 Intro:
Okay, time for a little trip down nostalgia road again. These two games were never rentals, but they made it into my collection of NES games and I have a fondness for them both. You see, as I may have mentioned in the past, I was a sickly kid growing up. I won't bore you with the details, sufficed to say--not even counting my transplant surgery--I had many surgeries, prolonged hospital stays, been laid up at home recouping from said hospital stays and...well, the list goes on. After the first go-round of one particularly grueling procedure that required drinking a "clear-you-out" mixture that smelled like old tires, my folks surprised me by getting me a couple of games to play as a "sorry you had to go through that" and "here is a reward for enduring such awfulness." I greatly appreciate that they did this for me. It aided my physical and emotional recovery as well. Believe me, being a kid and going through the stuff I had gone through was pretty rough. I'm forever grateful that my parents helped me maintain a semblance of a normal childhood by indulging me in the occasional video game gift to help the recovery time pass.
Let me say up front that Elevator Action was always going to be a win because I used to play that any time my family went into an arcade. I think I was pretty good at it too, if I recall correctly...
As far as the other game is concerned, I had never heard of Amagon. I read a fair amount of Nintendo Power and other game magazine, and they had never mentioned it. Regardless of the circumstances or my knowing about an NES game, it was pretty awesome to get a game as a kid. Especially when we usually only rented them or got them as birthday or Christmas presents.
Speaking of present, here we are in the present! I still have the games (I would never part with a single one of my beloved NES games), and I popped them in for this review and the question from other Friday Night Rentals remains: Do the games hold up still? Did they ever? Does sentiment override my better judgement in this review?
A little. But I think that is okay in this case, given what I had to go through to "get" them.
Amagon:
So.
I made the mistake of thinking that because I was an adult now, this game would be easier. Obviously the memories I have of barely making it past the first level were my childish self not realizing that all games couldn't be like Super Mario where you get the hang of things pretty quickly. You just gotta learn the ropes. You just gotta know the enemy patterns. Just gotta realize that the game gravity is insane and that one hit deaths are pretty terrible in most video games...
Amagon was crazy hard back then, and has lost none of the difficulty for me now that I am an adult. The wonky gravity, one-touch deaths with no health bar (unless you grab a certain power up, but even then your health bar is temporary), and lack of continues make this one of the more bonkers-hard games I've ever played. I tried to play it again for this review, assuming my gamer reflexes refined via years of gaming would aid me in my quest to snap some pics from my own system and show levels beyond 1-2.
It. Did. Not. Happen.
I wanted to have pics of my own and talk at length on how now that I was a "mature adult", such things that were a frustration to me in the day were now mere child's play. However, I still appear not be able to eek much past the very first level. Now, I could probably dedicate more time beyond the 30-40 minutes to make it past 1-2. I could learn the patterns of the enemies, play smarter each time, yadda yadda yadda...
Mainly though, I'm not interested in trying to do that at this time because I'm not here today to talk about how I can eventually play better now as an adult. I'm here to talk about the memories I have as a kid and maybe a quick re-evaluation.
I remember the music, not because it is particularly memorable, but because it seemed to make use of higher pitched noises to create a tune that I think is still a little grating today. I remembered the enemy patterns better than I was expecting; it having been years since the last time I popped the game in. I remember trying hard to like this game better when I was a kid, after all, my folks got this for me to enjoy and to recover with...but the enjoyment was not happening as easily as I had hoped. I guess though, this is the one thing that has really changed. I think even thought years of gaming didn't equal better skills at this game and more enjoyment, it definitely made me more appreciative of it. My folks grabbed a game for me that looked pleasant enough, was a platformer, which I love; and they did it to help me because they knew that between fantasy books and games I had a childhood that was a lot of laying down due to sickness. So a big shout out to my folks for this game. I hope to beat it still some day.
Elevator Action:

I want to quote myself here to talk a little bit about this one:
"In addition to playing it every time I went to the arcade, I remember when I got it as a gift from my folks to help me through some tough times.  I was really sick as a kid, had a number of hospital visits here and there.  I still remember following a particularly rough procedure my folks tried to perk up my spirits by getting me two games.  One was a little title called Amagon; the other was the home port of Elevator Action!"
I loved this game back then, and I love it still. In fact, when there was a gaming competition a few months ago on one of my gamer groups, I downloaded a copy to my Nintendo Switch so I could play it everywhere. So I could improve beyond what I was able to do as a kid. Unlike Amagon, I was able to get better and better as I played again and again.
It offers a type of simple, solid old-school arcade experience that holds up still. The simple premise of you are spy who has broken into an enemy building and is swiping top secret files on the way to the street level via elevator. Shoot the bad guys, don't fall down the elevator shaft or get shot. Simple, uncomplicated, high scoring fun.
I gushed about this game years ago for a Midweek Music Box Article, and I could do it again here.
I have never made a "top ten" NES games list, but it wouldn't surprise me if I ever did make one that this game would be in there.
The responsive controls, the cleverly designed action, simple goals, and fun premise easily make this one a game that I can say if you don't already own it in some shape or form, you should do so. It is out there on the Nintendo Switch eShop, and it loads of fun.
I know that some arcade game ports can get old quickly for people. Between most of them having one-hit-deaths and no "ending," just the relentless pursuit of the high score; I can see why some may pass on on it. However, you'd be doing yourself a disservice to ignore this classic.
Okay, enough gushing over Elevator Action. For now.
As I wind down this installment, I really want to give a shout to my folks, if they ever happen to read this blog and see this post. I love having Amagon and Elevator Action. Yeah, I have a ton of games, I'm a gamer and that's how the hobby goes. But really, I love you both and want to have a thanks out there on the internet for both having gotten me these games as a kid to help pass the recovery time, and to just up and do that in the first place. I know money had to have been tight at the time, but you still did something that I think of as huge to this day. Thanks so much for both trying to keep me healthy as a kid, and knowing the ways to help me feel like a kid even though I was dealing with some pretty grown up things at the time.
So anywho, I don't have much more to say in this edition of Friday Night Rentals, other than it has obviously been a long time since my last entry. I really do intend to write more on this blog. In fact, I've got a few drafts right now so that I'm able to get some more content out each Friday for the next few weeks at least. I do have book projects that I have been working on, but not as much as I would like. I guess that is the nature of the times we are living in. Regardless, thanks for taking a few minutes to read my little blog. If you like what I write and want to throw a buck my way, cool. If not, I still appreciate that you took the time to read what I wrote. See you next time!
Posted by The Blue Jester at 10:19 PM