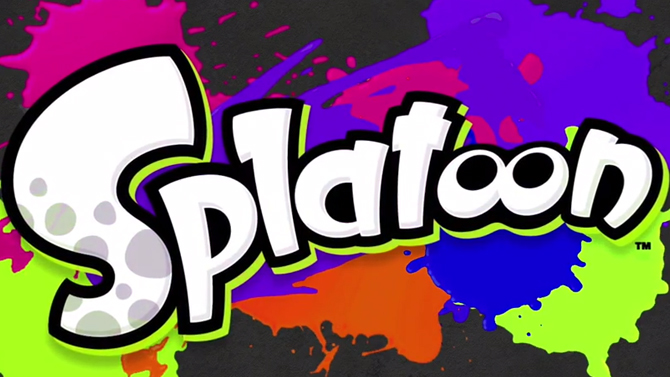 Squid-kid hybrids, gobs of globs of vibrantly colored ink, and an eclectic array of paint guns?  Sounds like Splatoon has hit finally hit the shelves.  For almost a year now Nintendo has shared info, images, and even a truncated demo version of their upcoming franchise "Splatoon."  Millions logged in for the "Online Testfire" a few weeks ago, and millions were ready to board the hype train and head off for whatever destination Nintendo was ready to take them to.  So, now that we've pulled into the station, was it worth the long wait?  Did the seemingly overpowered paint roller get powered down and make the game a bit more even?  Should you rush our and grab this game?

Oh heck yeah, download it or buy it now!

Wait, wait, wait...why should you do that and not just assume that your old pal Jester has also taken a ride on the hype train.  Let's break down the basics and you'll see why it's time to join in the Splatoon-mania.

I'm still not a fan of the odd use of motion of controls to control the way you are looking, but then again, how else would you do it?  That said the controls do feel natural and are easy to pick up on the go.  Maneuvering with the left analog stick works well enough and swimming through the ink is enjoyable and . Even if you don't poke your way through the initial tutorial you should have no problem getting into the swing of things.  I will say though that traveling through grates as you swim through ink can get a bit tricky at times.  I thought it was just me at first, but there were several times I saw other Splatooneers getting stuck for moment or two trying to do this.  Which, in a game that's as fast paced as Splatoon, a few moments is all it will take to get splatted.


But can you hum it?

Catchy pop rock tunes and jamming guitar riffs comprise the bulk of the music.  Most of the melodies are appropriately peppy and fast paced, but I never really caught myself humming or whistling any of them once I turned off the Wii U.  The main theme which I've linked to above does have a little bit of "hum-ability" factor, which I like, but I admit I feel a little disappointed that there aren't more memorable tunes in this budding franchise.  Nintendo has done great work with the Mario and Zelda series, but it might be that doing pop-rock riffs were just a little outside the comfort zone.  I like them well enough, but they just aren't as engaging as I'd like. (Still, they might find their way on to my ipod as background exercise music some day.)

Big, beautiful, bold colors dominate the landscape--or at least they will when the opposing teams finish with the playing field.  Whether florescent purple, vibrant blue, orangesicle-ish, or one of several others colors randomly used for your team to paint with; Splatoon delivers in terms of not only giving the ink a "wet" quality but also does fair job mimicking the viscosity.  The character animations of the flapping "hair tentacles" and ink-swimming are just as fun to watch as they are to play.  They have a cartoony style that feels reminiscent of Wind Waker and the facial expressions are animated in way that really sells the idea that these are kids playing around.  The little touches on the equipment and weapons you can buy make each weapon feel unique, and personally, I can't wait to crack open the Amiibos I managed to get for this game and see what other cool little add ons and costumes you can get for the squid-kids.

Okay, now here is where I get a bit "gushy."  I was apprehensive at first when I played the "Global Testfire."  The paint roller felt overpowered the weapons options seemed limited.  Of course, I should've realized it was just a small sample of what was to come.  With a number of weapons I still haven't leveled up enough to get, costume/clothing pieces that act as upgrades for certain abilities, and new maps still being loaded on to the Splatoon server; this game has a lot going for it.  "Splatting" other opponents and sending them back to the respawn point is every bit as satisfying as inking the heck out of everything in sight.  There seems to be no perfect strategy for winning, though I suspect in the following weeks that will change.  It has a bit of child-like whimsy and humor as the points/area covered are tallied at the end of a round and you see the other team are the "bad guys" and you are always the "good guys."

It's been noted that there is no in game chat feature so you can talk to teammates.  While this does seem like an odd choice, especially given the natural party aspect here; it makes it all the more satisfying when you do win.  Its fun to think that I'm playing along with some one halfway across the country and others from across the globe, but some how we all get it.  We all click and fall into place and work to make the team win.  There's a sort of awesomeness that comes with knowing I may not speak Japanese, but the lady playing on my team stopped inking an area to help me Splat some one before I got splatted.

As you might suspect, yes, this does make it all the more frustrating when the team doesn't gel and everyone goes in it for themselves.  Not to mention, if one of your teammates happens to drop out mid-game, you could be screwed.  I mean, there's just no way to really combat the loss of a fellow player when you are divided into teams of four.

I will be interested to see how gameplay changes over the coming weeks what new strategies people will use and the like.  Not to mention the game seems ripe for DLC from costumes, to weapons, to arenas.  Nintendo has just started to delve into that area itself with the Mario Kart 8 and Smash Bros., but those have been pretty awesome in my opinion, so I look forward to the possibility.  If you don't already own Splatoon, download it or go grab a physical copy now and join the fray!