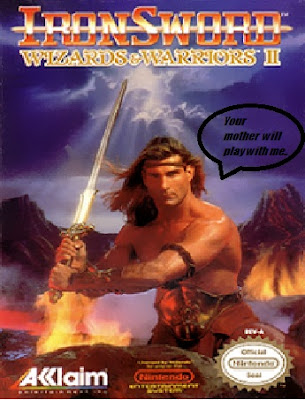 With a swish and flick, your foes fall before you, unable to withstand your might.  And no, it's not your fabulous hair that you're flicking, and the "might" you display has nothing to with the hulking hunk who infamously adorns the cover of this classic game.  You are Fabio!--er, KUROS!  The greatest warrior in the kingdom and vanquisher of the evil wizard Malkil!  (Gotta love those retro villain names.  Just mash malice and kill together and POOF!  You've named your bad guy.)

I suspect I must have overheard my mom mention his name before, or seen him on TV or something, because even back when I was a kid I knew who Fabio was, and I was left wondering why the bodice-ripper beefcake was on one of my beloved NES games.  Go back to the so-called "Romance" section of the local bookstore yah weirdo and stay away from my game cover!

Regardless of who was on the cover though, I always found the original Wizards and Warriors a fun challenge.  So when I found the sequel, Ironsword, sitting on the shelf of the video rental store, I knew I had to try it out.  Even if it meant that I had to hand a game to my mom that looked for all the world like something from the cover of what I considered the "girls section" of the book store.

I vaguely remember that I found the game hard, even harder than the original as a matter of fact.  But I was a kid who was worried that he might actually find himself playing through some weird romance novel too.  So when I picked up Ironsword at a swap this past year, I figured my remembrances of a game with frustrating difficulty were as silly as my concerns that I was going to play as a pixelated male super model.

Turns out a game where I played as Fabio might have been less frustrating.  How did my nostalgia stack up against modern me playing?

Even if Fabio seemed out of place, the game music seemed spot on.  Ironsword's music still has the same charm of the original.  The tunes convey adventure, a sense of eeriness when needed, and a fast pace when you battle Malkil in one of his elemental forms.  However, I really miss the quick-tempo music that plays when you start to get too low on health.  Sometimes games suffer from an annoying, persistent beep when  you are low on health.  Other times, the music changes pace or tone to let you know that you are at death's door.  I really appreciated how in the first game you got this fast-past music when you had one, maybe two hit points left.  In Ironsword no such tempo change takes place.  As such I was surprised a couple of times by dying thanks to not hearing the sound cues."

Aside from that, the music did the job and did it well.  I'm not sure if they will ever find their way onto my iPod's video game music play list, but nevertheless, they were enjoyable tunes.

You battle your way across various landscapes themed along with the elemental form Malkil has taken.  From clouds, to fiery pits, to water and earth; Fabio, I mean Kuros, has an epic quest ahead before he can engage in the final battle.

Good ol' Fabi--I mean Kuros still controls as well as ever.  In fact, it's even easier now to swish the sword around and prepare to stab any manner of vile creature that tries to stop you on your quest against the evil wizard Malkil.  However, it still feels like the sword has almost no reach, and I was never a fan of how enemies above you seemed able to knock you down and drain energy with ease, while you had no idea whether or not you scored a hit.

An added improvement is the shop that appears in the first portion of each level. You can buy health, or a special spell to help battle the baddies.  If you wanted, you could even play a pachinko-like game of chance with the opportunity to gamble some of your hard earned gems for more moolah.  With more money, you could get a spell more easily or fill you health.  But even if you do choose to fill your health, it almost feels like a waste of time as you could drain to less than half a life bar as soon as you step out of the shop.  Not to mention that several of the enemies drop what looks for all the world like what you'd expect from a health power up--BUT NO!  Most of those drops are actually little nuggets of life-draining death-bird!  I don't know who thought up that one, but it seemed insane. 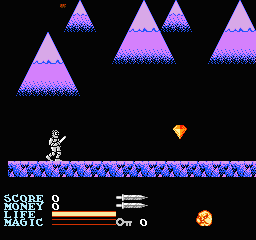 Those eyes looked goofy to me as a kid, and they look even goofier now.  Why did I have to go hunting for Kuros' helmet anyway?  Why was it locked away in a trunk?  Did Malkil sneak in and steal it away?  Couldn't Kuros have simply picked up another one?  Why doesn't the shopkeeper have a spare lying around that Kuros could use?

Whatever the reason, you start off each level with a slightly bug-eyed look that makes it seem like Kuros' armor must be squeezing his head too tightly.  I swear if those saucers he calls eye balls were any bigger they pop out on the floor.  Anywho, once you find the helmet and mercifully hide your head, Kuros looks like he's back to his old, knightly self.  The character design still seems solid, and the various enemies and animations are fairly well done.  At first the brightness of some of the colors seemed a bit weird to me.  Wasn't this an adventure game with knights in shining armor and evil wizards that needed defeating?  Well, I'm glad that the style has grown on me over the years, because I remember not liking it as a kid.  Even the screen-filling boss battle, though looking a little on the cartoony side, are well animated and have a nice style to them which I like seeing..  I still like the fact that you twitch about before finally dying.  Even if you have to lose (and by-golly do you have to lose, like, a lot) it's funny to see your guy flail.  I hope that doesn't sound too morbid, just that I appreciate the effort taken to make his death seem different then him just falling to the ground.

I had to look it up, and from what I can find online, the only reason Fabio graced the cover of this game was because Acclaim was looking for a well known guy to model as Kuros, and Fabio's agency put his name in for the job.  Another interesting tid-bit that I found was that Fabio was up against none other that Hulk Hogan for the job!  Kinda funny that.  I can only imagine what that would have looked like, and given how things have played out for the Hulkster of late, I'm kinda glad that Fabio made the cover.  (Which I never thought I would find myself saying.).

Fabio-focus aside, as much as I liked the game, I never could get anywhere in it.  I would barely make it to the boss battle in the first stage, and I think I may have gotten to the second level once or twice.  Even if I hadn't worried that I looked like I was asking to rent a playable romance novel I probably would never have rented this a second or third time due to it's difficulty.  As I've mentioned several times before, most times I rented a game for the weekend it was in the hopes I could finish the game off.  Despite a password system and familiar gameplay, I didn't ever plan on renting Ironsword beyond once or twice.  Now that I own the game as an adult; I can't be too sure I'll pop it in my NES ever again.

Unless a Game Genie is involved that is.