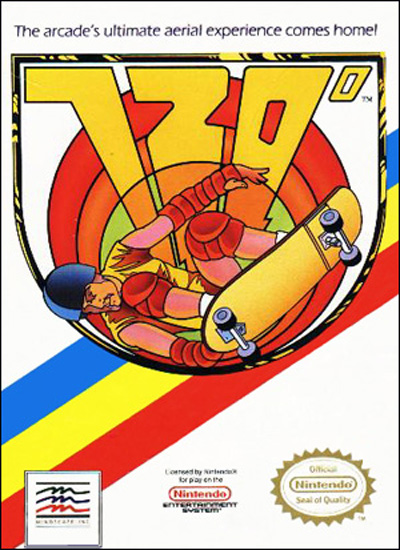 Before the epic soundtrack of Tony Hawk's Pro Skater 2, before the tunes of Skate or Die, there was...720.

Mindscape did a decent job turning this arcade classic into a worthy home port.  The controls felt nearly as good as the arcade, the challenges were just as tough and fun, and even the famous "Skate or Die" line made it into the game.  What didn't make it though was the music.  When you listen to Arcade vs Home...side by side, there isn't much that the two have in common.  Here's the arcade version:

Ahhhh...those characteristic Atari arcade twangs and beats.  They were obviously trying to imitate the rockin' and bodacious attitude of those crazy kids and there funky skateboards.  But Atari didn't want you to get too into the tunes and forget safety first.  Not only does the guy wear a helmet, but you're also cautioned not to try any of the stunts you're about to see depicted in the game.  I guess they thought kids would want to try out some radical moves back home on their own skateboards.  I'm pretty sure I never wanted to mimic the multiple face-plants I put my character through whenever I played.  One thing that obviously wasn't mimicked at all was the soundtrack.  Check out the home version of the 720 NES soundtrack:

Yup, no awesome tunes for you.  Just a simple whistle-type sound and maybe a few beats if your lucky.  It was safe to say that when 720 made it's way to the NES in 1989, Atari decided to give the ol' sound card a rest.  I knew it was unlikely I would get to hear the same level of music quality from the arcade, but I was admittedly disappointed the modulated voice yelling "Skate or Die" didn't make it to the home port.  I really enjoyed that as it not only added a fun bit of tension, but it let me know it was time to get my "A" game on and bust out some sweet moves....

Yeah, I was never that good at 720, but I did enjoy the game.  Just the music...the music was a little lacking and flat.  For an 8-bit chip tune, there are times that the sounds remind me of something I'd hear on the Atari 800.  As I said in my Elevator Action review though, it doesn't always take a full soundtrack to trigger great memories.  I enjoyed the heck out of this game as a kid, and it really was like playing the arcade at home.  It may not have had the some " 'tude" music of the arcade, but that didn't really matter.  If I heard that music playing in the other room while I was working on homework, I knew it meant my older brother had popped in 720 and was doing digital kick-flips so I needed to rush my homework so I could go play too.

Not every soundtrack needs to be a winner or be iPod-worthy in order to trigger some great memories.  Not that I think the music was terrible, but yeah...not exactly up there in the leagues of Super Mario Bros or The Legend of Zelda.  Still, whenever I hear it, I know it's time to grab a board and skate or die because those killer bees are coming and I'm just a few spin tricks away from my next park ticket...