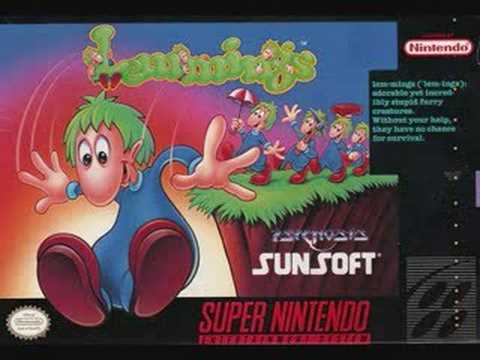 So help me, I love letting the little lemming guys die. Whether falling off a cliff and splatting, walking headlong into a chopping machine, or blowing them up myself when it was clear that I wasn't able to finish a level with the correct amount of lemmings--it's just too fun.

Now, before you brand me as a heartless killer and call up the local ASPCA, let me explain. Lemmings for the Super Nintendo was what you might call an enabler. With charming music, clever puzzles, and interesting level design, it was hard to resist bouncing between trying to solve a level and just exploding all the guys on screen and watch the fireworks. I may have overlooked this gem of a game before, but I feel it's high time to spend a Friday night once more with the pint-sized puzzle pals of Lemmings.

Ported from the PC, I think the graphics hold up pretty well. The character animation, for being a bunch of pixelated little guys, actually looks pretty smooth and their walk looks both cute and jaunty. I like that the world, and the lemmings themselves, are just there looking cute and cuddle. Not only does it make it harder (and somewhat oddly satisfying) to detonate them--but they aren't infused with gobs of "'tude" like so many other games of the 90's. It seemed like everyone from bats to cats to hedgehogs had a snarky smile and a quip they were just dying to share.  Whereas the lemmings are just straight up dying--if you don't save them that is.

What cheerful little marching music litters this game.  From the happy-go-lucky Main Theme:

To the whimsy of the stage 3 music:

"Stage 3 (Not as complicated as it sounds)"

To the goofy renditions of classic tunes like "She'll be Coming Round' the Mountain":

"She'll be Coming Round' the Mountain"

Much like the game itself, each tune or rendition captures the happy spirit of either saving or dooming the little lemming lads. I don't know if they are tunes which will fill my iPod anytime soon, but as I sit here typing it has helped pass the time in fairly pleasant way while simeltaneously making me want to drive a whole herd of the little buggers off a cliff.

As far as sound design goes, I just love it. Every lemming splat, to every "oh no" before the grab their heads and pop, to every squeaky squeal as drop to their doom just fills me with joy. Okay, maybe joy is a tad exaggerated, but it definitely makes me smile. I think that the designers put the noises in not only for cuteness factor but because they're a real stress relief should the levels ever get too frustrating or too difficult. It's hard to throw your controller across the room in anger when a simple double click will start the five second timer to detonate all remaining lemmings on screen; causing them to scream out "Oh no" in terror before blowing to bits.

Getting an instruction manual with a game rental was a rarity. If you got a photo copied manual or a sticker with basic instructions you were lucky. Some games I rented back when I was a kid came with nothing which could occasionally lead to an hour or so of frustration while trying to figure out the basics of how to play a game. (Don't even get me started on Castlevania 2).  What made this such a great game to rent on a Friday Night, and part of what makes it so much fun to own even today, comes from the way the designers laid out each of the first 8-10 levels of the game. Before each level, a set of text outlining your goals appears on screen. It tells you the minimum percentage of lemmings you need to save, how fast they drop from a trapdoor into the level itself, and how long you have to solve the stage. On top of this, those first few levels give major hints/basically outline what you have to do.  Step into the first stage, and you are told "Just Dig," and that's all you need to do. You can assign 10 digging jobs (the exact number of lemmings that come out of the trapdoor), the lemmings drop at a medium rate, and you only need 1 lemming to make it to the exit in order to pass the level. Immediately you learn that A)Levels might only give you a limited amount of tasks you can assign your lemmings. B)You can sometimes make mistakes and still be okay C)Sometimes levels have pre-assigned drop rates which can affect overall difficulty.--And this is just a few things you can learn without ever really being in danger of losing the stage.  The following levels teach you more and more, and it's not until about the 10th stage that the game really starts to throw slightly more difficult puzzles your way that require a bit of thought.  Not only did this make it so I never needed an instruction manual, it gave me a real sense of accomplishment when I completed those first few levels. Sure, they were like escalating tutorials, but because they required me to learn more about the game, and advanced the level each time I passed--I felt rewarded for my efforts.

I admit thought, there are times I really wish this game also had a mouse pack-in like Mario Paint. Not that you couldn't do things fairly easily with the SNES pad. From selecting various jobs for the lemmings to do, to scrolling various parts of the map so as to better know when and where to assign tasks--it works really well not just for a port of the Amiga game, but really for any game.

I can't remember how high of a level I got to before I ended up calling it quits for the night--thank God for the password feature--but I remember spending hours just trying to solve some of the higher levels only to end up having to detonate the lemmings over and over again before turning in for bed late. Having played it again for the article I was nearly sucked in again to handing over hours of my life to the Lemmings game.  It's nice to own this game knowing that on any given night, I can while away the hours navigating lemmings past traps and pitfalls, advancing level after level--or send them to their doom just for fun.