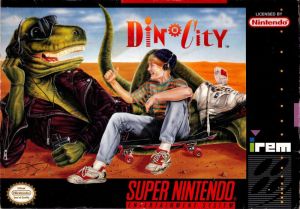 Oh no! Timmy and Jaimie have found themselves sucked into a giant TV screen after going into their dad's science lab and mucking about! Now they find themselves in an alternate universe full of anthropomorphic dinosaurs and gangs of cavemen and women! The only way back is to find a device stolen by the ubiquitous "Mr. Big," but They'll have help via Rex and Top. Two dinosaurs who've agreed to let the kids ride them like horses on their quest to return home. Is it goofy schlock or gamer goodness?  Well, here's my thoughts on DinoCity by Irem for this week's Friday Night Rentals:

As you might expect from a game with walking, talking, teenager-sized dinosaurs, you're in for an array of bright colors and cute character design. The overall athstetics fit the game well while never getting too cutesy. Given this was from the early 90's, it would have been far too easy for the art team on this to mimic the infamous Barney the Dinosaur when it came to overall look. The graphics are clean, with nice rounded features on the characters, and you never quite get that almost cheap-looking vibe which could easily come from a game like this.  I think this helps the replay factor in that the character design doesn't feel bland. I found one of the traps/obstacles which alternated fire and ice to be particularly clever both in design, and in coloring.

I don't have too much to say on the whole from of the DinoCity sound design as the effects seem fairly stock. For a minute they reminded me of sounds from Data East's own dino and caveman themed game, Joe and Mac. I feel like they could have done more here, especially given the soundtrack.

Hiroshi Kimura did a fantastic job composing the music for Dino City. It has a cheerful, pleasant quality that makes it worth revisiting. With a mixture of congo drum-style synthesized drums and peppy beats, it never feels sappy or redundant like one might expect from a game featuring dinosaurs and kids running around trying to beat bad guys. I think reason it holds up as something I personally could listen to while not play the game, is that you don't get the feeling the developers cheapened out with a simple, repetitious track one might expect from a game which seems kid-friendly and kid geared. Both SNES and NES systems are littered with kids games whose soundtracks are cloyingly sweet. have a listen and see what you think, won't you? If after listening you think you might want a rip of it, there's a sound test option, which is pretty darned nice.

For such a cutesy art style, game premise, and basic controls; the game can fool you into thinking it's a walk in the park. However, with tricky jumps, disappearing platforms that feel like something from Mega Man, and enemies that always seem to have your number--the game actually provides a bit of a challenge. Given you have a limited number of continues and only three hit points, it's tempting to simply goof around for a bit with the game and put it down after a few minutes. Yet the controls help draw you in. One thing that I didn't like in the day and don't like now is that you can't go back once you've scrolled forward. Even Super Mario Bros. had this issue solved on the NES eventually, why can't I go back in this game? I know there isn't much to see, but it would have helped with the jumps.

As I mentioned before, the controls are simple. You jump, you fire (or punch depending on what character you choose), and you can dismount the dino you ride in order to solve minor jumping puzzles. Through all this, the controls feel fair. Replaying it for the review, I never really found myself thinking that the movement was stiff, or an that ill-timed jumped was anything but my own fault. Was it aggravating to miss a ledge and not only not get to a bonus level, but die in the attempt? Sure thing it was! But after a few tries I managed to get the timing right. I think it stands to a game's credit when I feel like I was the one goofed up on something and not the developers.

Renting a game like this left me with an odd mix of frustration and interest. I wanted to keep playing so that I could beat the game because it seemed like it should have been something I could beat in a weekend. After all, the characters were cutesy dinosaurs with humans riding on them. Why couldn't I beat it? Why did we pick it up when the video store decided to sell it off to make room for other games? Why was I fooled into thinking I could beat it?

Did I mention the dinosaurs?

When I put this game in for the review, there were a number of things that I had forgotten, such as the inability of your character to go back, which I realized were part of it. That, and when you play it, the lack of continues and only three hit points piles on the difficulty. I did a bit of poking around and come to find that the game originally had a difficulty setting of Easy or Hard mode when it was developed in Japan. Well, I guess the easy setting didn't make it through customs because the default mode for us Americans was hard as nails.

Not that I'm bitter years later, just it leaves me wondering if we wouldn't have bought it if the game had continues as it is likely it would have been one of those games I could have beaten in a weekend. The funny thing is though, I recall renting other games that were as hard or harder over and over again until we did beat them. I don't remember the motivation for making this one an exception save maybe that it was yet another game that my mom and I enjoyed trading off taking turns on. Sometimes when it comes to gaming though, something like that is all it takes.