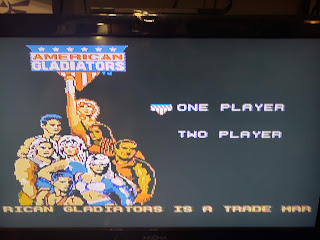 It's a double dose of nostalgia in this NES classic based on the popular TV show, American Gladiators. Okay...so maybe "classic" NES game is a bit of stretch for American Gladiators, but the TV show definitely falls under the retro/old school banner. It has an aesthetic that mashes up elements of 80s WWF and possible precursors of our more modern obstacle course based game shows like Wipeout and American Ninja Warrior. So has the game held up over time? Or does it go down in the final round? 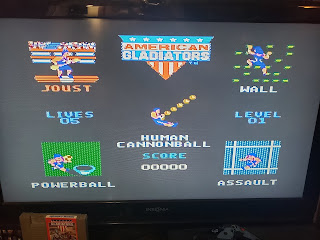 Something about this particular layout of a select screen gives that Mega Man vibe every time I see it. I don't know if Capcom was the first to do it, but they sure made it feel like a thing. In any case, when you start the game, you can choose from five different events. Each one plays a little different and has their own unique challenges. I won't say that the events are terrible or poor to play, but there are some that are harder than others, and this can lead to an uneven experience when you play. For example, in the Powerball event, the goal is to get a ball into each of the five baskets. You get 10 points per basket scored, with an extra life or "event attempt" as a reward if you score in each basket. It's fun to dodge the gladiators as they attempt to run into you and knock the ball out of your hands. Simple enough, right?
Yep. Simple and fun.
However, if you hop over to the Wall event, it's a different story. Your goal is to get to the top of the wall. Simple too, right?
No. Not at all.
In fact, between the gladiators coming from below to grab you and pull you off, and the ones that come from above and suicidally fling themselves off the wall in an effort to take you with them--this event is bonkers hard.
I played this particular stage for almost a half an hour straight and never made it to the top. Not only are the gladiators themselves a threat, but the wall itself has a weird layout that finds you avoiding gaps, maneuvering around obstacles, and navigating narrow spaces. On top of this, there's a timer. Now, I won't go so far as to say that it is impossible or near impossible, or even unfair (although it feels like it at times). I will say it feels "fiddly" when you get to the narrow gaps and that it does ride the line between being "Nintendo Hard" and feeling stupidly unfair. 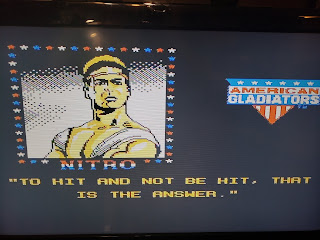 The colors and character sprites are actually pretty decent given the time period, but I guess when you really only need to stick to some solid reds, whites, and blues to keep up with the "American" part of the American Gladiators theme, you can't go too wrong. The digitized pictures of the gladiators aren't half bad for the time, but if you're looking for the gladiators that you actually do battle with on screen to match up in any way with how they look on TV, you will be disappointed. The characters have a look to them which feels like something from a Double Dragon game, and the movement isn't half bad. Not that there is much demanded of them, but all and all, the graphics aren't half bad for a later NES game.


While the music itself has some sufficient action beats and energy, it just never stuck with me. I remember some really annoying NES tunes from back in the day along with the really good ones. I wanted to remember this one, but grappled with remembering it, in fact I forgot it a few hours after playing the game. See, if it was terrible, I'd probably remember it, but I don't.  I will say this though, the scream sound effect is pretty memorable: 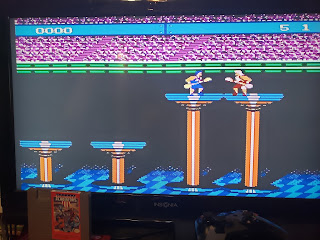 I remember being a little annoyed at this game as a kid for a host of reasons that seem silly to me now. Stuff like, "The characters in the game don't look like the guys from TV," and "Why does the joust game have a buncha platforms and not just two like the TV show?" I think now that I'm grown up I can appreciate the fact that they were trying to pad the length of the games within the limitations of NES cart. And...well, looking back on it...I was probably just too young to realize that just because I loved the NES and the graphics were a huge step up from the Atari, it didn't mean that the games themselves could process fully rendered versions of my favorite gladiators like Nitro and Zap.

Having picked this game up for only $5 at a local video game swap meet, I don't feel like the price point was too low or too high on the game. While it does have points in it that are definitely in the category of "Nintendo Hard," I don't feel like the times that I lost were too cheap or due to ridiculously small hit boxes on the enemies while my own character had one the size of a body builder on steroids. I'd probably recommend picking it up, but only if you're in the same vague nostalgia mood that I was when I got my copy. Not that the American Gladiators on the NES is terrible, but maybe only good for a brief weekend of entertainment like it was for me back in the day.
Posted by The Blue Jester at 10:59 PM