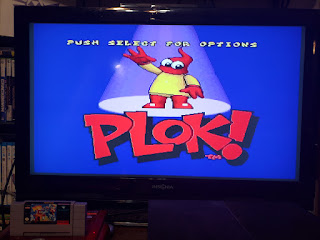 This particular game has been a long time coming both for review, and for me personally. I think I have hoped to find Plok in the so-called "wild" of game hunting for several years now. While not the very first game that I started hoping to find either in the wild or at a local game swap, I think Plok has always occupied a corner of my mind. I remembered it as a fun, if somewhat oddball game that I rented several times and kept either hoping to beat or hoping to get fairly far along on.  After years of hunting I came across it at a garage sale and I could not have been happier.

So, after a long wait (much like my return to game blogging) I now have that chance to once more see whether my happy memories were right--or if I was about to get a cold dose of adult-hood reality. 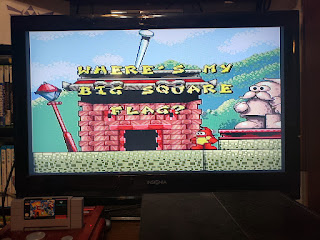 You are Plok! A king with a flag obsession who rules over a small set of islands. One day he goes out to lounge and finds his beloved flag is stolen! Thus begins his epic quest to recover his beloved flag and punish those who stole it.  But is this really a game about recovering a flag? Or are there more nefarious schemes and an evil villain lurking in the shadows using the flag-theft as a distraction? Thus begins the story....so, does this simple sounding quest give you a simple time? Well....

Plok offers a bigger challenge than I expected and was much, much harder than I recalled...yet I can't say it doesn't feel fair. There are a fair share of games on any given system--and the SNES is no exception--that have unreasonable difficulty with absurd hit boxes and barrages of endlessly respawning enemies who cheap-shot you at every turn.  I want to say despite getting battered and losing time and time again, I never felt like the game was cheap or had done me an unfair turn.

Okay, that's not totally true. There were a few times when logs and enemies literally dropped out of nowhere. Not to mention that there were several times along the first level/world where there are places where you needed to take blind faith leaps in order to get somewhere. Most times you will find a ledge, other times you will find yourself falling helplessly into the ocean with no recourse only to watch poor Plok hop in and out of the water, doomed to die. Also, collecting shells in the game and earning extra lives and a continue is an absolute must if you plan on ever beating the game. While getting those extra lives and a continue or two isn't impossible, the fact that you can get all the way through an area's levels, fight the boss and lose, and end up starting all over at the beginning...it can feel a bit harsh for a game that looks like it is a bit on "kiddie" side.
.
With the ability to toss his arms and legs as weapons, Plok really sets itself apart from other platformers. By having your "ammo" limited to the limbs you have "on hand" so-to-speak. Because of this limitation, you have an extra layer of challenge. If you go crazy and toss your arms and legs too much--you basically turn into the Black Knight from Monty Python and the Holy Grail. However, rather than being an immobile stump, you can find your limbless torso bouncing and sliding itself into danger. It's a fun mechanic and, despite the aforementioned challenges of blind jumps, it forces you to strategize a little before you attack. There are power-ups along the way such as suits that allow you to fire a more traditional projectile weapon, and a saw blade that causes Plok to spin in the direction he is facing and cut through obstacles and enemies for a brief distance. Both of these things are limited in nature though, and do not take away from the core mechanic of the game. 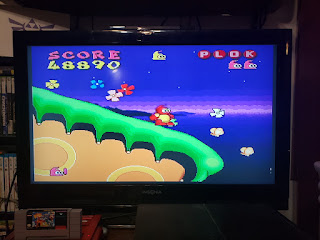 Published by Tradewest and developed by Software Creations, the game screams European design. I don't know why, but something about any game developed in Europe has a look and feel to it that just tells you where it came from. Likely it has to do with the use of bright colors and large sprites that really does it. Not that the overly large characters detract from the game play, but it does make it feel less like you are inhabiting a world where the characters are existing and living lives, and more like it is "just a game." That said, the vibrant colors work to Plok's advantage given the whimsical nature of a game where your main method of attack is to fling your appendages at enemies, power ups, and switches.

The animation cycles are fun and simple, and Plok himself is memorable design-wise for how uncomplicated he looks. I assume that his simple design likely comes from the fact that the designers wanted to make it easy to animate Plok when he throws his arms and legs. The big, bulging cartoon eyes on his head/cap do make cutesy expressions based on the environment and what is happening to Plok at the time, and many times during the game it felt like I was playing as a muppet. Expressive, yet simple.

Composed by Tim Follin, the soundtrack does shine in the amount of whimsy and energy it gives to various stages and power ups. Fun and bouncy, with a little hint of country bop and rock and roll, the main theme of Plok is really where the soundtrack for Plok shines. It has such variety and pep to it, you can't help but do a little head bob along to it and smile. I am sorry to say that most of the rest of the tracks in the game did not stick with me. They weren't bad or mediocre, just in an already crowded field of games with memorable soundtracks (the SNES library alone is enough competition for anyone) it just didn't stick with me over the years like I would have preferred. Of course, games like Super Mario World and Super Metroid are hard to compete with, but I am listening to the music as I write this review, and it is good and worth putting on in the background separately from the game.

I don't know why I never asked for Plok as a gift or tried to save up allowance or tried to find some other way of picking up the game when I was a kid. I remember liking the game well enough and I DID rent it several times hoping each time that I would get a chance to get a little further than I had the previous rental time. It was a funny and charming back then and it still is today.

Like I said before, it was a real joy to find it at a garage sale a while ago, and I think this is one of the games in my collection that I am willing to pop in more often then some other titles. Maybe one day I'll manage to even beat it over a weekend, just like I had hoped to do when I was a kid. If you don't already own it, I'd say it is worth having in your collection and having a go at beating every now and again.