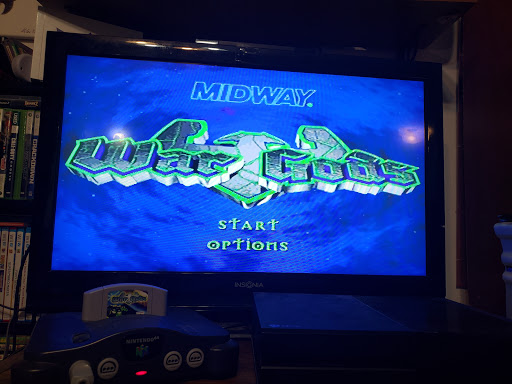 War Gods was filmed before a live studio audience! Please do not attempt any of the stunts seen on War Gods, Midway Entertainment would like to remind you that what you see depicted is intended for mature audiences and entertainment purposes only....

Okay, so maybe that wasn't the intro for the game War Gods, but I do remember being entertained by playing this game when it was in a local arcade. It would blare out it's title in that overly enthusiastic Midway manner, sounding for all the world like the announcer for an action heavy game show. In any case, the real question now is whether the game lives up to the former hype that it bellowed from arcades back in the day; or was the port a case of Nintendo 64 burping out another dud, suitable for quick cancellation in our collective memories, not to be renewed for a further season, or brought back via reboot? 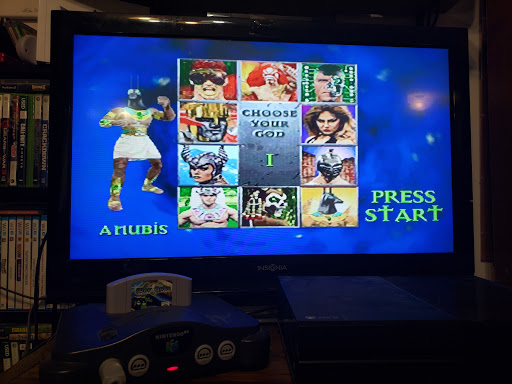 As the story for the game goes, in the distant past, a meteor know as "the ore" broke into 10 fragments and was scattered across the earth, only to be found by various humans who turned into powerful beings known as the War Gods. Each god is on a quest to find and defeat the other holders of the ore and become the most powerful being in the world...and it plays out pretty much how you'd expect.
Published by Midway and featuring a goofy cast of characters, War Gods feels every inch the lesser version of Mortal Kombat that you'd expect.
How I wish this wasn't so...
The premise seems like it should be a cheesy good time, but after spending some time trying to re-familiarize myself with War Gods, I kept wishing that it was Mortal Kombat.
The controls themselves are fine and they get the job done. The 3D function to help you move around the arena at the time were, and still are, a mix of "nice idea who's time has yet to come." That said, it would have been possible to make this game feel clunky and phoned in (even further than it already is) if the tightness of the controls were not there, but I never once felt that the hits and punches my guy would take were anything other than my own lack of ability in the fighting game genre. Full disclosure--I'm terrible at fighting games. This doesn't mean I don't enjoy goofing around with them from time to time, and even when I'm getting walloped, I'm usually still having a bit of fun.
Games like Street Fighter and Streets of Rage have thrived because the controls have stayed the same so you know what to expect. I wanted to be able to dive right into the game, but found myself looking up special moves that seemed more along the lines of a complex baking recipe than something from a fighting game. I think this comes from the fact that the game has its clunky 3D system, and it is far too easy to mess up a combo. This left me continually frustrated rather than feeling like I was about to pull off something cool, and I ended up abandoning my attempts pretty early on. A few times I managed to actually perform a special move, but darned if I know what I did because my attempts to recreate it were fruitless.
Graphics and Style: 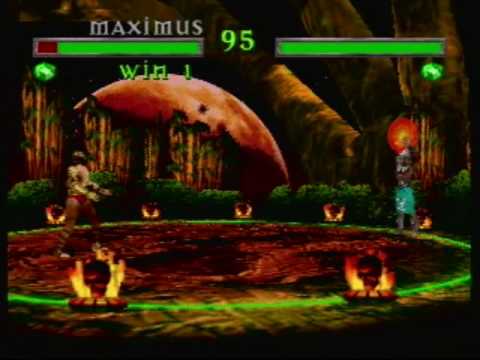 The biggest surprise here for me was the fact that the game was created by Midway. (Guess I didn't pay much attention to branding when it came to fighting games.) It's pretty obvious to me now though that they were trying to copycat themselves and create a new "battle to the death" fighting game. They attempted to spice things up by way of a "gods" motif.
However, the only one of the characters that feels like a "pantheon of the gods" pick would be Anubis. The rest of the playable characters are an oddball assortment of knock offs of the Terminator, a generic gladiator, a kabuki fighter, and so on. When I picked this game up for reviewing, the only other fighter I could recall off the top of my head from the game, beyond Anubis, was Kabuki Joe. And I only remembered him because the name sounded like one of those goofy 80s action movies. (Which, if there was such a movie I'd watch in a heartbeat.)
The characters, like Kabuki Joe and Anubis, should have a certain eccentric appeal, but they just don't feel like there was much thought put into them, and so much of what they do feels like a not-quite-as-cool version of Mortal Kombat. Even some of their special moves feel like a rip off of the moves of more well known characters. Things like a version of Scorpion's spear throw and Kano's laser beam eye make an appearance, or at least that is what it looked like was hitting me...
Anywho. The Graphics are what you would expect from a Nintendo 64 game that's poorly lit with 3D rendered characters. Slightly muddy, unpleasant backgrounds seem to be the norm, and if you turn out the lights and squint, then maybe you can look past how it feels. Now, this isn't to rag on the game for being of its time, but other games pulled the look off better?  (Noticing a theme here?)


Honestly, the tracks of the game are pretty standard fare and very forgettable at that. Everything about the sound effects and soundtrack feels a little too paint by numbers. Yeah, it has some decent guitar riffs, but nothing about those riffs will stick with you the next day. Maybe others can get more out of the music then me, but I just wasn't as into it as I usually am when a game tries to offer up heavy metal music.  Now granted, not everything in every game should have to hold up outside of the level or area that it is created for--but when it gets bland, it can get really bland. Sure, there are bits that are appropriately dark sounding and such, but in a way the whole soundtrack felt forced and as cookie cutter as the rest of the game.

I wish while playing War Gods for this review that I had rediscovered a gem, something fun and familiar that I was finally getting around to playing again now that I had my own copy--and not just a vague memory of when I rented it in the proverbial land of "back in the day." The sad truth though is that War Gods just wasn't that good. Maybe the arcade experience was better than the Nintendo 64 port of the game, but as I was writing this my research led me to find out that because War Gods received such lukewarm reviews in the arcade when it came out, not many cabinets are out there, so the chances of me seeing if I would have preferred the cabinet to the port are slim.  All said, War Gods is not a terrible game, and it does have a thing or two that stuck with me over the years, but even nostalgia wasn't enough to pull this game beyond the vague feeling of, "Oh yeah, I remember War Gods."