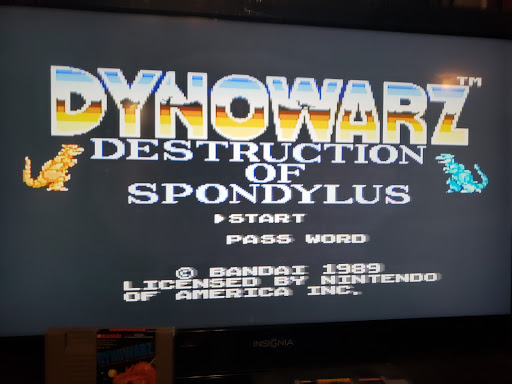 I have a three-year-old son, so covering this particular game was inevitable. No, not the Thanos kind of inevitable, but inevitable all the same. I figure when I was a kid, I was into dinosaurs. It's kind of a right of passage when it comes to little boys. That and robots. And ninjas (likely those will be a future Friday Night Rentals, if not many of them). And other action things in general. But if you can fuse Dinosaurs AND robots, all the better. If they could have worked ninjas into this game, it would have blown minds. Still, fighting robot dinos wasn't a bad place to start. I remember having a good time playing Dynowarz as a kid, and not much beyond that. So, was Dynowarz still as good time when I picked it up again? Or are dinos and robots better left in the past?

In Dynowarz: Destruction of Spondylus...there's likely a complicated back story and premise that I won't pretend to know anything about. Seeing as I don't have a game manual, we're gonna stick with what you can generally glean just as if you rented it back in the day. Yeah. Yeah. I could look up the details, but is it really important if you were a kid renting this back in the day?

You are a space fighter who pilots a giant robot dinosaur with the goal of getting to an enemy base at the end of the level and destroying it before it destroys you. The game is fairly simple as you move from left to right battling other bots along the way. The jumps would be easy save for one little thing. This is not due to the gaps. (More on this later). There's not much variety from level to level when it comes to challenge or even layout, at least there wasn't for the three levels that I played through to help refresh my memory for this little review/trip down memory lane.  Not that it was dull playing mind you, just something about each level seemed fairly stripped down, even for an original NES game.

The real variety comes from the weapons your robo-dinosaur can get and power up along the way. Everything from a robo-fist that launches from your bot, to a bomb toss, to a basic blaster.  You level up your weapons by grabbing different power ups, but as soon as you grab a new power up, you lose the previous one. Meaning that you can get a blaster powered up to level 3, then accidentally grab a fist shot and be back at square one when it comes to your weaponry. It isn't a deal-breaker though. Each of the enemy robo-dinos you battle aren't too strong and they provide occasional energy power ups which make navigating a level satisfying and not frustrating. Once you get to the enemy base portion of the game, you disembark your robo-dino and go through a short base level to get to a blobish-looking boss that puts up little fight.  Overall, the challenge of the game just isn't there. Not that it isn't fun, just that the game isn't as difficult as it could be.

Except in one regard.

When you jump there's a momentary delay as your character, be it the dinobot or space guy, crouches and THEN jumps. It can making judging the timing of gaps difficult in a way that doesn't feel like the game intends it to be. I get that when you are leaping from one moving platform to the next there's supposed to be a bit of a challenge, but one would hope that it was born of the game feeling fair. Something about the oddity of the way your character jumps adds an artificial challenge that comes from the control itself and not the game. There are other games in that time and some in present day which have the weird crouch-then-jump thing and they manage to pull it off better. Dinowarz does not. Barring that, the game does offer you the chance to continue from the level that you die on and a code for each level, so even though there's the odd jumping mechanic and you don't have extra lives--the game still feels playable and not ridiculously hard. Sometimes this lack of difficulty makes it less interesting than it could be, but it is still fun overall. 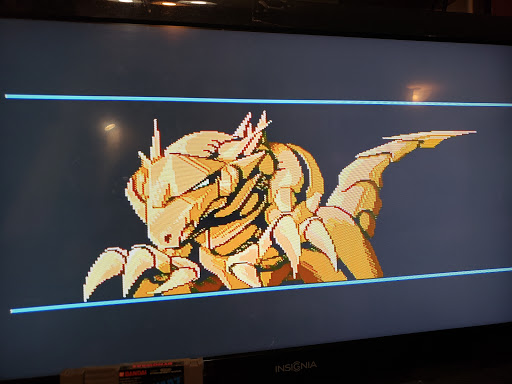 The brief cut scenes you see as you transition from space guy to robo-dino are pretty solid for the time. Digitized pictures of actors and movie sets never translated well in this era, but when it came to stylized cartoon images and brief cut scenes with or without minor animation, the NES was able to do it in a way that made a game feel a bit more epic. (See the entire Ninja Gaiden for more proof of this.) 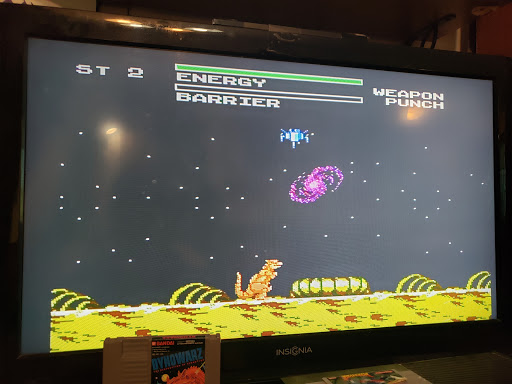 As for the game itself, it isn't overly complex in the graphics department. Not that this is a knock against it, just that I wish Dynowarz could have added something extra. By using a starry background and having much of the adventure be in outer space/other planets, the game doesn't have to work too hard or do much in the way of parallax scrolling to give it a vague 3D feel. Going from the well rendered, kick-butt looking dino to this was a little bit of a let down, even back in the day. Again, I know the NES wasn't exactly a graphical powerhouse, just wish that for all the detail on the dino cut scene, the background could have had a little more going on.  Still, the colors are nice and the sprites are decently detailed for what you get.


Sometimes a game can have music and sound that doesn't fit, is terrible, or just has such average feel that you can forget it pretty quickly after playing. For Dynowarz, the sound effects are okay and the music has some decent beats that while not always memorable, are fun to listen to from time to time. I particularly like the Intro/Title screen music for it's continuous crescendo. It feels adventurous and exciting, while not being to over-the-top. I'd recommend hunting down the soundtrack on Youtube for some decent background tunes every now and then, but it is likely that you will forget them quickly or would have a hard time identifying a track from the game if it were in a shuffle of other games.

As I mentioned before, I vaguely remember enjoying Dynowarz as a kid.  When I played it so I could do this little slice of blogging nostalgia, I had fun again and most times that's enough. However, a new bit of joy and fun was added this time around as my little boy enjoyed watching me blast dinos as he called out the names of the various dinosaur robots from stegos to T-rex's. Most of the time my little boy will want me stop playing if I try to sneak in a little video game playing during the day. This time he was fine with it and wanted me to continue. I don't know if Dinowarz would be my first choice when doing some retro gaming or even as an introduction to retro gaming for my kids--but if it provides a gateway to introduce my little guy into the world of classic Nintendo, that's just fine by me.