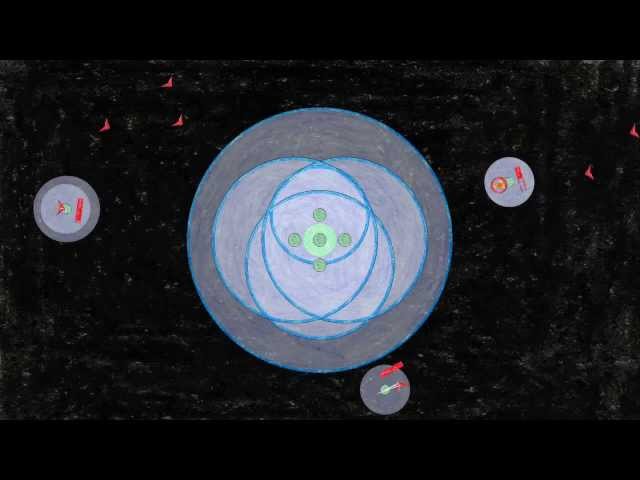 Relentless enemy attacks and only you and your dogged persistence and cunning to prolong certain doom?  Count me in fellow Missile Commanders, I am up for the game! I’m a longtime fan of the tower defense genre so when I saw that the price had dropped on ZaciSa’s Last Stand for the Wii U, I decided it was time to give it a whirl.

In ZaciSa’s Last Stand you defend your base or bases, through the use of various drones, from an unending onslaught of spaceships bent on death-ramming your base to kingdom come. You can choose from several difficulty modes, and the chalkboard look of the ships and space provide an interesting and unique visual style to the game.  Those things said…man, I tried so hard to like this game, I really did.  I tried numerous times as a matter of fact.  Each time I hoped it would get better.  That somehow, some way this would be the magic time when things clicked for me.  However, I would pick the game up after about a week, play for ten minutes before getting disappointed with it all over again.  Why did it get frustrating so quickly?

The ridiculous, almost obnoxious way ZaciSa's ramps up the difficulty on you early into the gameplay experience creates an enormous stumbling block right out of the gate.  As you would expect with any tower defense worth its missiles, the number and strength of enemies increases as you progress.  You earn money for every enemy you defeat, and you use the money you get to buy various power ups for your base or various drones to defend it.  However, the difficulty acceleration in ZaciSa’s goes beyond what might considered a reasonable difficulty increase.  A good tower defense game builds on challenges, each wave a little more difficult than the rest while introducing you to new enemies that require new strategies and weapons to handle them.  However, the way in which ZaciSa’s ramps up the difficulty so suddenly, it feels less like a tower defense game and more like you’re playing a trial and error game.  If you’re lucky, you’ll stumble on the right combination of drones and power-ups.  If you don’t, you’re toast.   Personally, every time I tried to play the game, I found even my most heavily powered up drone woefully inadequate when this sudden difficulty bump took place.  On the upside, the game makes clever use of the game pad which is both nice to see and adds something to the gameplay.

Controls
Something unique to several Wii U games is the need for the player to constantly switch their attention from the action on the TV screen to a menu screen on the game pad.  With a well done game like the conversion of Legend of Zelda: The Wind Waker HD or the real time strategy game Swords and Shields, there is virtually no hiccup in gameplay and the action feels natural.  ZaciSa’s has its players look at the gamepad menu screen in order to upgrade the various drones used in base defense.  You can be strategic in a number of different ways from switching out types of drones to powering up some drones and not others.  The menu also offers three game speed settings in an attempt to balance the game-play and give players an ease of transition between the two screens while playing the game.  As I said, it's nice to see that some developers are embracing the game pad technology.  However, because of the sudden increase in difficulty, you don't have a chance to get comfortable looking between the television screen where the action takes place, and the Wii U pad where you select how best to use the money you've earned beating enemies.  Worse yet, the difficulty jump would always seem to happen when I was looking at the Wii U pad navigating the power-up screens, so the opportunity to delivery a more natural experience was lost--at least on me.  Now, it should be noted that you can control the speed at which the game happens, but this is also a determent rather than the feature it should be.

Game Features of Note
For example, if you select the “0x” option to bring the game to a standstill so you can upgrade without worry of enemy attack, you have no idea if your powering up wisely.  If you go for the “1x” speed, you get a little bit better feel for what is working and what is not, but the game moves painfully slow.  If you try your hand at the highest “3x” speed you can at least feel like the game is moving along, but then you will find your eyes darting back and forth between screen and gamepad in a mad dash to keep up and keep ahead of the multi-colored triangles that kamikaze their way through your defenses.

Graphics and Style
Speaking of multi-colored triangles, a brief word on the game's visuals.  Admittedly, the animated chalkboard look was a selling point to me.  I think it is a fun and clever twist on the usual highly detailed and specific looking enemies you can get out of a tower defense game.  I don't think you need to always have crisp, super shiny bosses in order for the game to be interesting and fun to play.  The problem once again though is that the hope when you are going for simpler graphics that the gameplay and control will draw you in, but it doesn't.

Music
Concerning the music, it has an appropriate sound comprised of techno beats and okay rhythms that cycle after a few minutes.  It’s pleasant enough, but it’s also not exactly anything to write home about either.  It falls into that category of music where it works at the time, but is completely forgettable.  I honestly have nothing more to say about this, which is a shame in itself because there are games out there with multiple problems like this one, but at least the soundtrack made them a bit more worthwhile.  Sadly, this wasn't one of them.

All of these aspects fail to deliver a smooth game experience and instead make ZaciSa's have a rather hodgepodge feel.

Final Analysis:
ZaciSa's Last Stand is a mildly amusing tower defense game that offers a unique, simplistic visual style and interesting game play that I would welcome to the genre.  I hope that the forthcoming patch Zenfa Productions LLC is working on makes necessary adjustments to gameplay and adds some new sprites, but my hopes aren't too high.  In the end I would like to see a sequel to the game but one that does not ask so much of its players so quickly and one that has more interesting enemy sprites while making use of the chalk-board style art.  There is potential here for a genuinely fun and challenging game experience with its own unique flair.  As is though, the game just feels like the budget title that it is.  If you want to try your hand at it, the game is pretty cheap and goes on sale from time to time but you’re likely to forget you even downloaded this game a month after having done so.