Sometimes action music in a video game can just do it's job providing a steady rhythm to get you pumped and ready to play.  Not that it's terrible, just that it does what it needs to do and then you forget about it immediately after turning off the game.  Was that persistent, plodding rhythm from a water level?  Was it from an impossibly huge forest?  Was it some cheesy, yet catchy upbeat Japanese pop tune run over the credits as you watched scenes from the game?  Who knows?

Since Nintendo has announced they are revisiting the Nintendo World championships, I thought it would be fun to revisit this sound track as it was a qualifying game used in the pretend version of the NWC. 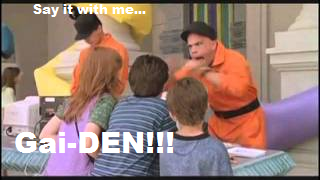 Goofy pronunciations aside; not only does this game have fantastic fast-paced stage music, it has great intro music, dramatic cut scene music, and even a quick but catchy "act" intro tune.  I like that it doesn't hold back on the soundtrack or fill cut scenes with dead air and sound effects.  The music doesn't just help make the game more complete; for Ninja Gaiden the music makes makes it a movie. Unlike some of the other video game music I listen to for writing, exercise, or every day chores: I typically only listen to this set of tunes when I play Ninja Gaiden.  Not that I don't like the tunes, just they suit the game so darn well I feel the urge to pop in the game and play it when I hear the music.  Much like if I listen to the Star Wars music for too long in one sitting, suddenly I want to watch Han, Luke, Obi-Wan, and the rest of the gang escape Tatooine to save the galaxy.

Ninja Gaiden has the perfect mix of high energy and fast beats for the action platforming sections and suspenseful, slower music for the dramatic cut scenes.  I hear that music and think of the cinematic intro used to set up the plot, I think of the adventure that awaits, and suddenly I'm ready to fight alongside Ryu as we attempt to avenge his father's death and stop the villainous Jaquio and his plans to make darkness reign supreme.

Another thing I appreciate about the sound track is how it doesn't try to keep the fast rhythm from the gameplay going after you've beaten a level.  When you transition to a cut scene, the pace of the music slows, the story unfolds, and the mystery surrounding the death of Ryu's dad expands.  The designers, and more importantly the game's composer, recognized you not only need to give the player a moment to breathe between rounds, but also that you can't keep them going at continuous clip without some kind of reward for their accomplishment.  Many scenes have a steady, drum-like beat building as defeated henchmen and CIA operatives make it clear evil is gaining strength.  These scenes between each act not only give the player a second to recoup their thumbs, but also gives them more of the story set to a soundtrack that fills them with a sense both of mystery and growing dread about what the future portends.

Sure, the game demands quick jumps, fast dodges so that enemies don't knock you back into a pit, and perfect timing to kill difficult bosses--but it doesn't have all that and then immediately forget itself once the story element comes along.  I love that the music for the cut scenes has a drastically different tone than the music of the gameplay.  Those cinematic cut scenes with their ominous mood music are a darn site better reward than a few fireworks and a cheery tune if I grab a pole at the right time and angle.

Not to knock Mario, but at this point in the Nintendo's life I think I was expecting and even demanding more from the game.  That didn't mean I had any less love for the original Super Mario Bros. and the music in it.  It just meant that when a game came along in the late 80's I wanted it to use the music to say different things and not just rely on a set of three to four tunes.  I was wanting my games to have a movie like quality, even before the graphics could make it so that they were near indistinguishable from an animated feature, much like it is on modern day systems.

A melody of mystery.

Thanks to the work of game composer Keiji Yamagishi, not only did we get a soundtrack that made the game feel as cinematic as any movie, but it made the mad dash through alleyways, crazy cliff climbs, and jungle jogs seem all the more fast paced and your goal of getting the demon statues all that much more pressing.  It made each of those areas feel like they weren't just a new level to beat in a mere game, but actual "acts" from a movie; each one drawing you to the thrilling conclusion.  And the poetic, melancholic nature of the end music really helps you gain that sense of victory at a high price.  No sitting back and watching this show though, to get to the end of this you movie you need to play the game.  But if you want to listen to the soundtrack in full, I've embedded it below.  If you've never played the game though and want to experience the joy of hearing the end music after having earned it, then go pull out your Nintendo or download it from the Wii U shop.  Even if you aren't into the game, the music itself is worth the play through.