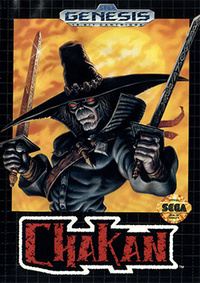 Halloween still haunts the Friday Night Rentals and it's time to unleash some more supernatural gameplay with Chakan: The Foreverman.

From the Grim Reaper face to awesome looking hat, as a kid I was sold on this game just on the cover art alone.  When my family got a Sega, after years of being longtime Nintendo people, I was looking for some of those "edgy" games that Sega was known for, but nothing too edgy.  Mortal Kombat was pretty much out thanks to it's much ballyhoo'ed violence. And my folks weren't too keen on my renting a game like Toe Jam and Earl thanks to the words "Toe Jam" being in the title.  After all, it sounded like it would rely on fart jokes, and gross out humor to tell it's story.  Creepy undead things though?  For some reason those made the cut when it came to game rental time.  How else can one explain the fact I was allowed to rent any number of Castlevania games?  They might not have seemed too spooky, but still, it's something I wonder to this day.  Well, whatever the reason, there was a time when I rented Chakan:  The Forever Man.  I nabbed it a while back (I think from a retro store) because once again I was wondering if I was just too young and too impatient or if the game really was as hard as I remembered.

Yeah, it was hard.  For a Sega game, it was "Nintendo Hard."

Okay, I know that sounds weird, but let me explain a little as we go on with a little bit of memory and gaem review....

I was pleasantly surprised that Chakan looked a reasonable amount like the character on the cover.  From a day and age where sometimes you'd get a Mega Man who looked nothing like what he did on the box (thankfully) and others where Nintendo Black Box games showed exactly what you were getting into, it was nice to see that the duel-sword wielding guy from the cover was actually what I got to play as.

Not only that, but the levels were appropriately spooky and the monsters ranged from cloaked figures, demonic lizards, and the usual rats and bats that populate every horror game it would seem.  The animations of Chakan's sword movement were great, and general walking never felt too choppy despite the larger character sprites.  Everything conveyed just the level of spookyiness you'd want from a game about an undying hero who looks like the death himself.

I like that each stage has it's own unique music, and it has an appropriately dark tone.  Something about the drubbing intro also helps to sell you on the story that you're a deathless hero (who still can somehow run out of lives) cursed to forever fight the forces of darkness.  However, some stages have better composed music than others.  There are some that you'll wish you could burn on to an iPod for your Halloween background music, and there are others which you wish you could just mute the sound as they grow high pitched and tinny sounding in attempts to be "spine-tingling."    Overall though, the tunes are nothing you'll walk away humming.  Not to say that it's bad, just that for all the work that it does setting up the appropriate atmosphere, Chakan doesn't have any memorable tunes save maybe for the opening crawl.  I will also say this, when it came to games of this nature, games that had a darker edge to them, there was something about the Sega that gave them that extra bit of edge.  Not that they always had it over Nintendo, but sometimes I felt more creeped out by Sega music.  (In a good way.  Not a, "Please stop, my ears are bleeding" way.)

After winning a bet with death, you've been cursed to try and defeat villainous bosses and collect their powers to use on other bosses so that you might at least put your soul to rest.  Basically it's like Mega Man, only instead of robots you fight demons, monsters, and creatures from the darkest pit. Unlike Mega Man, you aren't a cheerful little blue robot and instead are an undying swordsman, cursed with eternal life as a half-death looking creature.  Good thing you've got your trusty duel swords to help you jump, slash, and stab your way to redemption and possible release from your living hell.  Too bad for you though that your hit box can sometimes feel a mile wide.  There are times when jumps and enemies feel unfairly difficult not because they pose a real challenge, but because they can kill you from a distance Donatello-style.  There are several points in the game and spaced through various levels where you need to dodge an enemy and wedge yourself between two dangerous objects/traps as they spring around you.  This leads to a ton of cheap-feeling deaths and worse, you have to restart the level from the very beginning. No checkpoint for you.  There are some good things about the control and gameplay though.  It wasn't all big hit boxes.

I like the premise for the game and I especially like the threat or vow that Chakan states in a bit of scrolling text that proceeds a level before you enter it from the "ethereal hub world."  It's especially funny given how quickly I seem to die in this game.  All of Chakan's threats and vows seem utterly pointless and empty if the net result is that he dies and respawns in the hub world.  Chakan himself controls well enough and the directional control you have over him is fantastic.  I love being able to roll into a "death ball" or point the sword in any direction.  It's just not enough though to overcome the collision detection in my opinion.

So now that I've played this game again and relived a little bit of my childhood Halloween rentals what do I think?

Unless I come across a game shark, I may not play this game again.  I know, I know.  It seems like I'd rather cheat than buckle down and face the challenge.  Well...that's true.  I wanted to enjoy this game.  I like the Mega Man style of weapon collection to defeat different bosses, I think the character design is great, and the premise has the Halloween feel I want.  However, it's hard to put yourself through the kind of punishment that the game dishes out.  I don't mind high difficult, I love it in fact.  I sometimes don't mind a trial-and-error style of gameplay.  What I don't love is when I game has so much going for it through visuals, music, and control--but blows it on something that feels like a cheap way of extending gameplay.

Chakan was admittedly fun in some parts, but not fun enough that I'd revisit again on an annual basis for Halloween gaming.