Midweek Music Box: Back to the Future 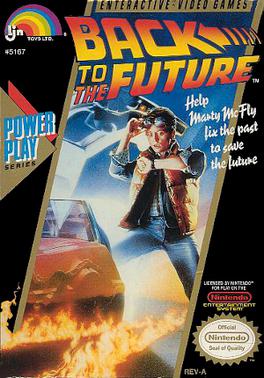 Retro game music that sticks with us doesn't necessarily have to have any musical or enjoyable quality to it for us to really remember listening to it.  And criminy, does the Back to the Future music not have it!  At least, that's what I thought back in the day.  As the only song in the game--barring the Enchantment under the Sea Dance level (which I never reached)--it just keeps looping and looping and looping...

The relentlessness of it was incredible.  I mean you run along the streets of Hill Valley and the song plays:

Marty hurls chocolate shakes at Biff and his gang and the song plays:

Marty gets erased from existence and the song plays:

Marty tries to prevent the end of his existence and possible unraveling of the universe by making a pass at his own mom and, like some odd harbinger of pain, the song plays on:

Yes, it never stops.  Apparently, it even goes on and plays after you finish the game and the crummy text box ending pops up.  Funny enough, the music didn't bother me so much as the fact the first stage was essentially an overhead shooter where you grab clocks instead of fuel and hurl bowling balls instead of missiles.  I think my stubborn refusal to notice the obviousness of game type was also what lead me to not take notice of the music.  It wasn't until the second time I rented this game--yes, I rented an LJN game twice--that I noticed the music and it really started to get to me.

Little did I know that LJN actually had given us music from the movie.  You see, how was I to know at the time that what I was hearing was a version of Huey Lewis'  "Power of Love" going faster than a Delorean traveling at 88 miles per hour ?  Just listen to this:

Once I found out this tidbit, I was stunned.  Before this revelation, I thought people were making excuses for a retro game out of nostalgia gone wrong.  Between my own less-than fond memories of the game and after the Angry Video Game Nerd had his say about the Back to the Future game; I figured the case was closed.  There was simply no defense for the repetitive music and lack of connection to the movie.  But in reality, LJN actually managed to sneak in the copyrighted song and make the game that much more Back to the Future-y.  I mean, it still kinda shocks me to this day that "Power of Love" was there all along.  I will admit there's an odd twinge of nostalgia that creeps in when I hear the original version, but nothing like what I'd call a desire to run out in the street and tell other gamers to download the "soundtrack" of the game.  Who would've thought LJN could get something right?

Of course I had to make this particular Midweek Music Box in honor of it being Back to the Future Day.  I had thought about just doing another Halloween themed post, but this is Back to the Future we're talking about here.  I mean Great Scott, May the Fourth Be With You happens every year!  I know this might sound a bit heavy, but the future, this October 21st 2015 future, only happens once, ever.  Kinda like LJN having gotten something right.