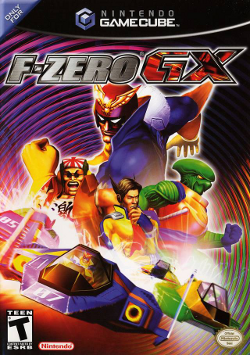 Running at a glorious 60 FPS, this racing game for the Gamecube has so much going for it from bright and colorful graphics an eclectic cast of characters, to most especially the music.  Not that my current T.V. screen lacks decent size, I'm content with a 32" thanks, but F-Zero GX ranks up there in my top five games that make me wish I had a jumbo big screen.  Can you image zooming along on a jumbo screen with those sweet sounds pumping out?  (Of course, I would be open to a sound system upgrade, but that's another story...)

I mean seriously though, the F-Zero GX music has the "gotta go fast" soundtrack that the last few installments of the Sonic the Hedgehog franchise wish they had.  Constant thumping, heart-pounding rhythms playing directly on your emotions.  I'm glad I don't have some of these tunes playing when I drive anywhere because likely as not I'd get pulled over for speeding, not to mention reckless driving.  So what are some of the specifics as to what makes F-Zero GX's track so incredible?  First, take a listen to the music from Mute City:

Do you hear that?  Futuristic sound that doesn't have a dated feel.  Guitar strains and a fast chomping heavy metal guitar.  Ever more rapid drum beats and a pounding techno rhythm.  Best of all?  The upbeat tone that it conveys.  Being one of the first races you'll do, naturally there had to be tune that conveyed not only the tone of the track, but of the game itself.  Composers Hidenori Shoji and
Daiki Kasho (and Alan Bray.  From what I can tell, he did the vocals) have put together a tune that truly show off not only the kind of music they are bringing to the game, but the very nature of the game itself.  The Mute City theme does set itself apart, but there are so many other great tunes within F-Zero, I wanted to single out at least one.  However, for your listening enjoyment, here' the complete soundtrack:

If you can find a way to download this music, you seriously need to do so.  There are many games that attempt to have "the sound of the future," and as time passes they end up seeming as hilariously dated as the Flash Gordon series of old.   However, F-Zero still feels as if it's got a bead on what the future of music might hold.  What with the passage of dub-step, the popularity of techno, and more modern songs using digital sounding effects to create padding--I can almost imagine a world where techno-pop music not only is the rage, but dominates all we do.  Which apparently racing is a whole lot of what we will do.  That and listening to some kick-butt tunes as we fly down reverse gravity corridors and tube-like tunnels.  Who needs hover-boards?  The F-Zero GX future is the one we should be waiting for.