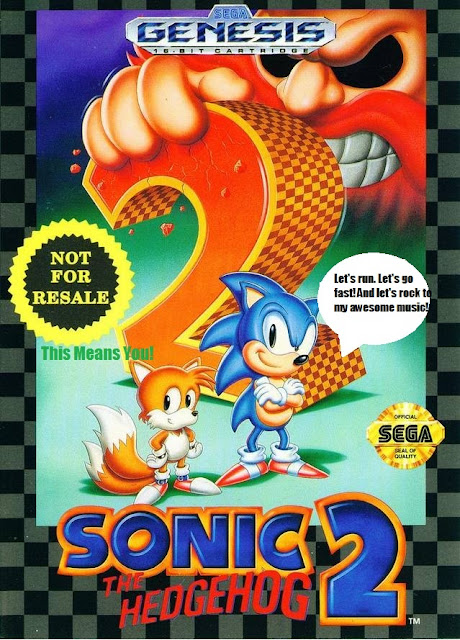 I'm more of a Nintendo guy, that much should be clear by now. But just because you'll typically find me rocking, working, writing, or cleaning to a Nintendo tune doesn't mean I don't love game music on other platforms--even a Sega!  While I won't go so far as to say, "Sega does what Ninten-don't;" I freely admit many Sega games had fantastic tunes. With that said, this time around on the Midweek Music Box we'll be taking a look at Sonic the Hedgehog 2.  I'm only going to highlight three tracks tracks this time around, as I could probably write pages worth on each track and why it evokes so many memories.


What a cheerful and adventurous little melody.  It's got a nice quick pace that helps set the tone of you playing as the fastest rodent alive.  Drum hits aren't too fast, the synthesized keyboard doesn't overpower, and you're left with a pleasant, upbeat feeling. Emerald Hill Zone does a nice job of welcoming you into this odd world of blue hedgehogs, immortal double-tailed foxes, and egg-shaped villains that enjoy robotizing all the furry critters in the world.  It was a happy catchy tune, and I loved running past the various obstacles and enemies as it played.  What a great way to start the game!

To me this was like a souped up, well done version of something I would expect to hear from the Mega Man X series or someone's version of a classic Mega Man tune, only done with a bit of extra flair.  Yeah, I compared music from Sega's star mascot to that of a well known Nintendo franchise, but that's how it goes, and in my opinion I'm paying the game a huge compliment.  I love the somewhat darker and urgent tone of the tune.  Like it's saying, "Okay, you get the gist of the game?  Good, because it's time to get serious."  It has a fast tempo as you would expect from a Sonic game, but still manages to give you a broad sense of something deeper going on in the game.  You are on an adventure where dangers abound.  It's not all going to be green fields, easy enemies and simple jumps.  I'm sure more than once I lost a life thanks to getting lost in the music while I wound my way through this level.


So you go from dashing around Emerald Hills, navigating a deadly chemical plant, through mysterious ruins and are ready for whatever might lie on the horizon, right?  Well, time to kick back to a smooth set of jazzy cymbal hits, drum beats, and boppin' tune.  The whole level design gives you that modern "Vegas at Night" feel, but when it comes to the music, it feels like something from the 1920's.  It's swingin' and hip!  Sure you're already having great fun bouncing around the slots and trying to win rings, but the level probably wouldn't act such a time suck if it weren't for the music that keeps you wanting to trying your luck.  I guess in that way it truly captures a Vegas feel.  I probably lost more lives on this level than any other as the catchy tune and fun action kept me playing over and over again.


So there you have it, a little glimpse into some of the tunes that made Sonic 2 a great game back in the day--and still does now.  I could easily pop in any one of these tracks to help me through my work day, to bop along while writing, or even just driving around town running errands.  If you have a way of grabbing these tunes and others from Sonic 2 I'd highly recommend doing so.
Posted by The Blue Jester at 1:59 PM