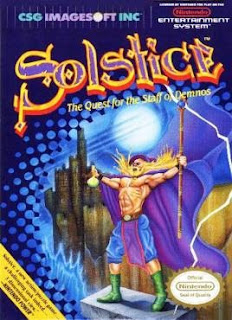 Don't you just love the box art for Solstice? I mean, c'mon, this wizard looks like he has choices on how he's going to pound your sorry butt into into the ground. He's got a magic potion in one hand, a staff shooting lightening in the other, and the sheer power of his pec muscles causes his beard to fly back because it can't handle the awesomeness from his roided out chest! This guy looks more like some crazed viking warrior than a mage. I guess that's why he covered his entire body in a purple robe during gameplay. The developers at CSG Imagesoft Ince didn't think we were capable of handling the magnificence of his mighty pecs.  Too bad he couldn't use those muscles to help during the game, because even though I rented Solstice several times when I was a kid, I never managed to get anywhere. Just how frustrating was the game?  Well, it's Isometric March Madness time, and this game typifies the "madness" of isometric games to me.

Typically when playing games about conquering evil wizards, you get muscled men who look like Fabio a la' Wizards and Warriors.  In Solstice, instead of the knight as hero, we get Shadax the Wizard who, according to the box art,  still has a spectacular body because that's how those medieval types roll, so to speak. Morbius the Malevolent has kidnapped the lovely Princess Eleanor and plans to do the ol' ritual sacrifice thing on the princess in order to become a "Baron of Darkness."  Well, he might just succeed because your quest to get a mystical staff to defeat Morbius means navigating through a peril filled fortress filled with monsters and deathtraps.

You'd think for a juiced up, muscle bound wizard nothing would be impossible. Well, sometimes it feels like it IS impossible because control of Shadax the Wizard always felt slippery to me and still does when I picked it up years later. Even though the control of the wizard is fairly straight forward, and using the various potions that freeze time or stun enemies is fairly intuitive; it constantly feels like the razor-thin margin of error allowed on death-defying jumps means you'll be plunging to your death more often than not. You can pick up continue tokens in the maze-like setting, and sometimes find potion refills. However, with how quickly you can die (and die you will) those extra lives and continues will likely disappear before you know it.

Now this game was the first game that came to my mind when I thought about doing an entire month devoted to isometric NES games. I am grateful that I remembered that there are other games out there with an isometric view, because the isometric views in Solstice are one part cool and well detailed, and 2 parts extreme frustration. There were so many times as a kid, and so many times now as an adult, where I would fall to my death on spikes, touch an enemy and instantly vaporize, or narrowly miss a complex sequence of jumps because the perspective and planes were wonky. Think that block you're about to jump on is directly in front of you? Nope! It's actually two feet to the left and you are now headed for a group of deadly spikes. I tell ya, this was some classic "Nintendo Hard," stuff going on.

Despite the difficulty, I always enjoyed renting the game because I found the isometric view both fun and different, and a bit exciting. It was almost like 3D!...almost.  The monsters were colorful and interesting while being appropriately creepy and evil looking, and the various rooms had neat little touches that made each one feel unique so I was never left wondering if I had already been in a particular room. This combination of monsters and varying rooms along with the map screen truly made it feel as if you were exploring the depths of a mysterious fortress.

I can't say too much about sound design because if there's more to it than the hopping noise, cast potion sound, and those high-pitched death screams, I haven't heard it. And boy howdy have I heard that death scream over and over again:

Not too shabby for being the main song you hear. The low bass and plodding tune are catchy and help pass the time (and frustration). The fact that it goes from the simple beats and builds up to include flute-like sounds and tamborine-ish jingles while keeping the low beats actually is pretty impressive for the Nintendo's sound capability. The composer managed to make the music sound like it was something from a renaissance fair. Even though you pretty much only hear this tune, it's fairly good for what it has to do. I'd gladly put it on loop while working a project or doing a task that required concentration.

Reflection after the rental:

I finally picked this game up about a year ago. I thought maybe time and experience had built within me the patience necessary to deal with the slippery controls and figure out the various puzzles. Heck, with the internet I could cheat like crazy if I wanted and watch a walk-through to help me solve the many puzzles. Well, I wanted to come at this isometric game from the same perspective as I did when I was a kid. No instruction manual (the rental store usually didn't have them) and almost no clue as to how to control the wizard and solve puzzles. Well, even though I figured out the controls, it seems clear to me now that the vile being Morbius will likely sacrifice the young maiden and gain unbelievable power long before the Wizard Shadax finds his way through the mysterious fortress. I like puzzle games, and I like that it requires a bit of figuring out in order to advance in the game.  However, even with the passing of time, I still have a hard time figuring out where on the isometric play field and given objects are.

Despite  the frustration though, I still like the game and am glad I finally have it in my collection. Without the pressure of the impending weekend's end coming, I know that if I don't beat the game by the time Sunday evening rolls around, it's okay. I own Solstice now and have all the time I need to either fall into a set of spikes for the hundredth time...or actually make it over them for once.
Posted by The Blue Jester at 10:15 AM