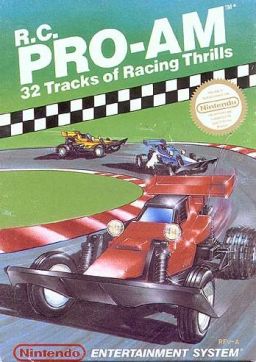 Time to wrap up Isometric March Madness with one of the most memorable games on the NES, R.C. Pro-Am. The R.C. stands for "rotten cheater" and don't tell me that it stands for "remote control" because I remember the computer cars when I raced against them as the filthy cheaters they were. And when I played it again for this review...well, let's get down to reviewin', shall we?

R.C. Pro-Am has a fantastic concept that just doesn't pan out as well any of us would like--or at least as well as I'd like. I love remote control cars, and as a kid the idea of playing as one sounded great! Especially since you got the opportunity to grab power ups and weapons to zip by or blow up other racers. Yes, it may predate the SNES franchise-spawning classic Mario Kart, but it just didn't have the chops to make the game reach its full potential. Not to say that it wasn't a ton of fun to play, just that the game has issues that stood out then and stand out all the more today.

First and foremost, and lastmost, and everything in-between-most; the A.I. gets ridiculously hard and cheaty after only a few races. Let me be clear here, I don't just mean Nintendo-Hard. I mean the computer racers clearly are dumping gallons of nitro into hidden compartments because if you progress far enough in the game they go from merely difficult competitors to inhuman monster machines which not even a direct missile can stop. Yes, they are computer controlled, but it feels like straight up demon possession going on. There were several times when I found myself suddenly "out" of the top 3, and needing to use one of the three continues. No problem, just hop back in the rack, use one of the missile power ups to take some lead cars and secure a spot, right? Wrong! I found myself out again as one computer racer took a slight edge ahead of me, and the one in first place rocketed ahead, in a place where there were no speed boosts and snatched a win. I have no idea what the team at Rare was thinking, but clearly they were thinking of punishing all who dared to even think they'd ever see all 32 levels.

Aside from the insanely over-powered computer oppenents the rest of the game isn't half bad, but it isn't that great either. The map on the bottom of the screen offers a chance for you to glance and see where upcoming turns are, however, you have no idea where hazards like pop-up walls, water spots, and oil slicks are.  You can grab missiles to shoot racers ahead of you, or bombs to drop on those behind you--if you manage to get ahead.  Powering up your car with various upgrades would be cool, but whatever power up you get, the computer instantly gets as well. Grabbing power ups can get especially annoying on higher levels as you bump a wall nabbing a power up, only to see a computer racer going zooming ahead of you like it just stole your speed boost. If you grab the letters scattered on the track, you upgrade your r.c. to a faster, more sporty model, but so does the computer, and trust me, they have way more experience controlling the car than you ever will.

As far as the controls go, they aren't too bad for what they are. In fact, I'd say that it ties Marble Madness in terms of well designed control.  If you have the track and various traps memorized, maneuvering around them isn't too much of a problem, too bad there are all those stupid computer racers around. While you can enjoy the racing well enough, if you're like me you'll be wishing there was a time trial mode or something so you could get a bit more familiar with the tracks on the higher levels. As it stands, it's just you and the cheating computer driving R.C.'s

The style is fairly simple and straightforward. It's you and three other one color racers blazing around a relatively small track littered with obstacles. The simple colors work okay I guess. I know there were hardware limitations, and getting the games frame rate (if that's the right term for it) to move as well as it does probably takes a lot.  However, I selfishly admit I wish that the colors on screen or the vehicle designs were just a little more beefed up than they were.  But for what they had to work with, Rare's take on isometric angles wasn't half bad.

Shame that the music from the title screen is all you get really in terms of music.  Other than the title music and a nice, quick ditty before each race that gets you revved up and ready to play, there's no music to speak of.  It's too bad to because maybe a sweet soundtrack would have distracted from the fact that the computer was engaging in high-level cheaterness.

Sound design in the game never really impressed me as a kid, and as an adult I just find it annoying. Whatever satisfaction I get from launching a missile that temporarily stops one of the computer units
dead in its tracks quickly evaporates as I go squealing around a corner. I'll give this to R.C. Pro-Am though, that squealing tire sound is every bit as annoying as their real-world counter part.

It's not hard to believe that this title was put out by Rare. The control was great, what little music there was matched the mood of the game alright, and for what the graphics were at time they weren't too bad. I played the game over and over and over again before doing this reflection. I kept say, "Just one more race and I'll get it." Some how I was able to fool myself into thinking that I'd get better and magically make it through all of the game.  I remember feeling like this back when I was a kid too. Thinking that winning the race was just around the corner, just one more try and I'd make it not only further than last time, but that I'd actually beat the game.  Well, despite getting it for Christmas as a kid, and trying and trying then and trying and trying as an adult, I never got as far as level 20.  But maybe, just maybe next time I will.

If it weren't for the cheaty computer.
Posted by The Blue Jester at 10:59 PM