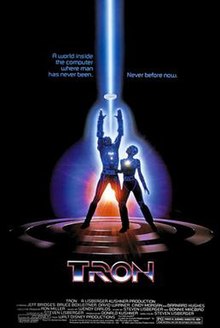 Sometimes you just want to escape into a world of video games--like actually, physically be there. I long for a certain level of escapism that no Occulus Rift nor any amount of red-screened Virtual Boy can bring.  When I want to unwind from a long day, I love popping in the original Super Mario Bros. or Splatoon or an occasional RPG so that I can have some down time. But the six year-old me still wonders what it would be like to be in there in a video game grabbing mushrooms, fighting with mythical swords, or freeing the land of Hyrule. I think part of the reason I liked Captain N so much as a kid was that it was about a guy transported to a video game world.   As cool as that was to me though (hey, I was a little kid at the time, gimmie a break) Captain N never took the place in my heart that had already been forged by a certain Disney classic. Lets talk about the game grid and what better way to talk about it than with an instrumental montage of music from one of my favorite movies.  Yes, it's time for some Tron music!


Now, let me say that I love Daft Punk's music, and I think they did an excellent job with Tron Legacy--But for me, when I think of Tron music, I think of the original.  What a great soundtrack for an incredible movie.  Yeah, there were so many people back when the movie was released who thought the concept was too campy, too ludicrous to take anything about the movie seriously.  What was that, a "Master Control Progam?" "He's stuck in the so-called 'Grid'?" "Give me a break."  But as a kid--heck, even as an adult--I love this movie. Yeah, it's more fantasy than sci-fi, but what did I care of genres?  Years later when I saw the sequel I realized how much a part of the movie the music was.  Here's one of the more iconic tracks from the movie, "The Light Sailer" scene:


Doesn't that take you right there into the action? Doesn't it make you feel like you're right there beside Flynn as he and Yori try to escape Sark?  Egad, did Wendy Carlos do a fantastic job or what? Her compositions didn't rely solely on digital keyboards and odd synthesizers to create the feeling that you were viewing an entirely different world, but when it did use them, it did merely have an "80's feel." In think that inclusion of ethereal voices was a brilliant stroke that makes the music have more weight to it.  It  melds synthetic and organic components in such a way that I can't imagine this soundtrack being improved on in any way.  It was movie about a video game world, not just another video game.  Not a Mario or Kombat world, but a world where life was a video game. I dunno, maybe it's just my nostalgia and tiredness talking.

When I talk about video game music, I don't just want to highlight the games that had fantastic soundtracks, but I want to also talk about those shows, artists, and composers that have done so much to help video game music not only merely "sound good," but bring it to life in a way that makes it feel like the world they are writing the music for actually exists.  It's not just about fast paced music with great beats (although that can be good too); it's about making that world feel real, and listening the soundtrack from the original Tron is a great reminder of how the world created in video games can come to life in a way that feels real to us all:


When I listen to the music from Tron I'm reminded of my six year old self, and not just how I loved playing video games as a kid ( I still enjoy games now). But I feel like I did back then, and remember how I dreamed that one day, it might just be possible to visit a place I can only dream of. That just beyond sight and imagination lies another world; the world of the Grid.