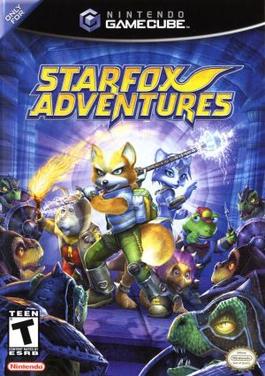 Not your typical Star Fox game...

Star Fox on SNES was--no--IS an incredible game, even to do this day. I remember playing and replaying for hours on end, trying different paths, attempting higher and higher scores. The polygons looked so 3-D (for the time) and the music really drew you in and amped up your excitement level for the action unfolding on screen. But it wasn't just another on-rails shooter, it was the start of an incredible new Nintendo franchise. Following this came Star Fox 64, what a great game it was--no IS--too! Better graphics, voice acting, and a new feature--All Range Mode!  The series was getting better with each new console. So you can imagine when I arrived at my local Blockbuster and saw Star Fox Adventures sitting on the shelf, all nice and ready for me to rent, I was fairly excited. Here it was! The latest in the space adventures of Fox McCloud.  It was all mine for the renting and no other shmuck was going to get his hands on the game.  Finnaly, it was THIS shmuck's turn to play!  I couldn't wait to get home, pop the latest Star Fox into my Gamecube and take off in an Arwing, loaded with missiles and ready for action.

So, can you imagine my reaction when I popped in the game and saw this:

What's going? Where's the Star Fox crew now?  Who's the furry? Wait, there are dinosaurs now? Okay I guess but...wait!  What the heck is Fox doing outside of the Arwing? What's up with all the running around? Fox! Fox! Can you hear me Fox? You're having an identity crisis! You think you're Link or something. Snap out of it Fox! Put down the stick, get back in the space ship, and blast the heck outta there!

Despite my pleas, Fox McCloud didn't listen, and instead of flying around blasting enemy ships, I found myself meandering around, trying to solve puzzles, interacting with various furry creatures and intelligent dinosaurs; and doing far too little flying. In fact the Arwing's appearance in this Star Fox game constitutes more of a cameo then actual action sequence. Or sure, those flying sections are in there, but knowing that they are only a brief reprieve from all the running around kept me from getting fully engaged in the game.

And then there's the music. In the other Star Fox games it was a great blend of semi-cheesy, bombastic and adventurous romp-type music. Well, it started out that way at first with the intro music, but after that it turned into atmospheric stuff that truthfully I probably couldn't pick out in a crowd.  Not that it's terrible or anything, just that when I was picking through various tracks I just wasn't finding myself remembering any of them all that well. The tunes were just a little ordinary for my tastes I guess. What do you think of them?:

Well, with a different format and music that didn't grab my attention, I quickly gave up on this game and ended up renting something else. I didn't hate it or resent it, I just wasn't interested in playing as Fox McCloud if I wasn't wooshing through space, dodging enemy fire, and blasting baddies.  I recently pick the game up and am ready to give it a second chance. I've heard there's a lot too it that makes it feel like a Zelda game if you give it time to grow on you. Now that I don't have to worry about returning this game to the video store, perhaps I will give it a chance to grow on me and I'll come to appreciate it in a whole new light.

For now though, it's time to fire up the Wii U, grab the gamepad, and take Andross down in Star Fox Zero.