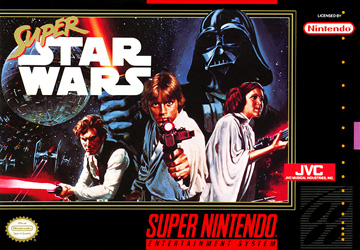 What do you get when you combine an iconic franchise, a kid hoping to play as the hero of a galaxy far, far away; and murderously hard gameplay?  Super Star Wars for the Super Nintendo of course! A not too long time ago, in home far, far away (California to be exact) I rented the Super Star Wars game hoping for shot at Jedi glory. What I found was endlessly impossible mazes inside of sand crawlers, womp rats that could rip you to pieces, and a farm boy so hopelessly inept at handling a lightsaber it was a wonder he hadn't impaled himself on the thing yet.  The NES days were over at this point, but "Nintendo Hard" levels of difficulty were still very much alive.  So what was it like to play the game a long long time ago, and how was it today?

I was impressed back then. This wasn't some choppy nonsense and uncontrollable land-speeders on dull brown backgrounds, this was lightsabers, as bright and vibrant as you could want!  There were countless settings both from the movie and new ones invented just for the game. I never once felt like I was anywhere other than in the Star Wars universe.  In fact, playing this game years later, I still feel like I'm immersed in the Star Wars universe when I play it, more so than when I played a certain "Podracer" game.  It really holds up in terms of selling you the locations, the parallax scrolling ads depth that doesn't just feel gimmicky or slapped on. In light of the prequels, I guess at this point they cared about the quality of the game.

From digitized voices to the typical bass-y sounds of the SNES, it really felt like I was listening to the actual Star Wars music back when I was a kid. Now that I'm all grown up and more discerning it still really holds up! Okay, not so much....Yeah, compared to the full orchestras and CD quality tracks of the more recent Battlefront and Star Wars online, it may sound as if I'm embellishing a bit ...Maybe I am a little, but the soundtrack certainly takes me back to when I was a kid.  Listening now, it sounds sickly and as tinny as any SNES track, but at the time it was gold.

These days it sounds like a slightly out of tune kids instrument, like those recorders or xylophones we had.   The instrument is not horrible, and you know it's capable of producing music--it just does so off key.  If you had your choice between this and the real deal--and these days you do--you'll likely have the original soundtrack on your ipod, and so would I.  The music accomplishes what it needs to though, and through the tinny trumpets and overly bass-y drums, you get John Williams famous compositions on your SNES.

Where the audio really shines is in the sound design.  Lightsabers sound like lightsabers, the guns have the same quick "pew" sound they do in the movies, and Luke really screams like a pansy when something hurts him or he dies--It's just like in the movies!

Remember earlier when I said the game was murderously hard? Well, you may think I was exaggerating, and you'd be wrong. In fact, I was probably selling it a bit short. The game automatically starts you at the medium or "Brave" setting, if you don't want to die within a few seconds, best set it to easy.  No wonder uncle Owen didn't want Luke to leave home! If the Tatooine of the movie was like in the game, Luke wouldn't have made it past the first moister collector, let alone to the Mos Eisley cantina. When I was a kid, this was one of those games that frustrated the utter daylights out of me! With hard platforming, insanely difficult villains that weren't even boss battles, and little help in the way of continues and health; it should have been one of those games that I played only on Friday, then ignored for the rest of the weekend while I played something else. But it was Star Wars!!! How could I possibly turn my back on what was once the greatest set of movies of all time. (Remember, this was pre-prequel days...) Funny how even now I feel like this holds true.

To be fair, it's not that Luke controls poorly, or at least not too poorly. It's pretty obvious though that wherever Luke goes, the sands of Tatooine are always with him as he slips off platforms or slides from narrow ledges leading either to endless backtracking, or certain doom. Back then I never noticed how some levels take on an almost Hanna Barbara cartoon type quality as you see the same background over and over. Guess I was too busy enjoying being Luke to notice how much it felt like covering the same territory. Also, why does everyone have to stop to shoot? Why can't I run while shooting? I know it's not a run and gun, but still, it feels weird to come to a complete halt to fire at everything from womp rats to stormtroopers. It's feels like I'm tempting fate holding still for a stormtrooper, despite their legendary inaccuracy. I can't help wondering even now if Luke's inability to hit as much as I'd like comes from me not doing well or if it's actually Luke's fault for not having better control of his Jedi powers. This game was only set in the first movie, so I'm pretty sure it's his non-Jedi-ish-ness that does it.

I gave this game chance after chance when I was a kid. To the point that it was one of those games that I actually went out and got for the SNES.  So here we are, years later and I still feel like I'm facing insurmountable odds, incredible difficulty, and the feeling that five continues just isn't nearly enough.  It may still have that old Star Wars feel, but I can see why look was tempted by the Dark Side. No where's my game genie?