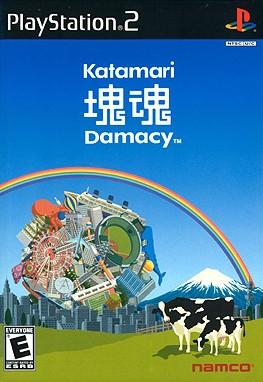 Katamari Damacy has a simple, pleasant tune that comes on as soon as you load up game ...and dang it if it doesn't just catch your ears in an instant without ever letting go. I think it ranks up there in my top five tunes that get stuck in my head after hearing only a few notes. Seriously, this thing has Ducktales theme song type quality to it......

Okay, now that you're done singing the Ducktales theme to yourself and done thinking of how life is like a hurricane, here in, Duckberg; get the ol' ear canal ready for more tunes it won't be able to shake:

Who would ever have thought a game with simple polygon graphics, bright colors, and easy-going gameplay would carry within it one of the most memorable and catchy game tunes of the last 20 years? I know that may seem like a bold statement, but for me it that simple, almost intro is as catchy as the Mario Theme.

It gets you in the groove, relaxes the mood, and generally sells the overall lax-attitude gameplay that's in store for the player. It doesn't get you hyped-up or  over-excited, but it does interested you as soon as you hear it. What game would dare to not have a bold and bombastic tune at its intro? Who would have thought rolling a giant ball around and trying to gather everything from push pins, to people, to continents would provide hours and hours of joy? Certainly not me. In fact when a couple of friends of mine introduced me to the game, I was skeptical when they explained the concept. Why should I pay any attention to the little green man with the funny shaped head? Well, as soon as the first few "Nah Nah Nah's" started, I couldn't help but both smile, and get the tune forever stuck in my head.

Sometimes soundtracks try too hard, you know what I mean? Like they bring out the biggest of kettle drums, and the most brooding of tunes to convey mood, but it ends up sounding like every other "edgy" soundtrack out there. We get it, you're the soundtrack for a gritty, dark and mysterious FPS that's a "Totally unique experience," now off to the corner with all the others. But the main tune, and in fact all the tunes of Katamari Damacy, are crushingly pleasant and happy-go-lucky. They fit the goofy tone and actions of the "King of the Universe" and his son's mission to roll things up to recreate the galaxy so well, that anything other than the aggressive cheerfulness would do a disservice to the gameplay.  Take Cherry Blossom Color Season (Cherry Tree Times) for example:

Sooooo cute sounding. So peppy!  So much happiness. Soooo what are they saying? I don't know and don't care, it's cute and pretty and just so cheerful and chibi you can practically taste the quirkiness.

And how about that pepped up version of the Nah Nah Nah song?

Okay, enough of that.  I'll finish up this review by sharing the lyrics from the song, beyond the Na Na Na'ing:

Katamari on the Rocks

Gaaaaaaah!!! What about the rhythm and pepped-up drum make this so irrepressibly cute? Why can't I help but smile?  Well, I have no idea what they're saying here either, but I am filled with much smiles while doing the rolling. I'll leave off with a copy of the lyrics for this final song so you can sing-a-long...should you so wish....