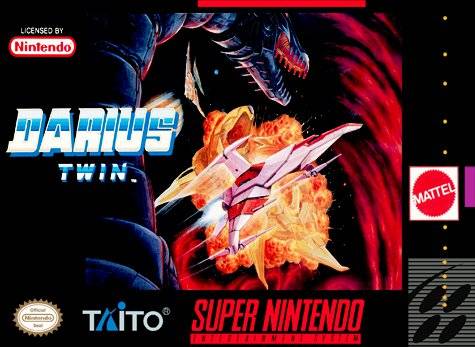 This Jester has tanned, rested, and returned ready for some music! Back from vacation and back to the grind doesn't have to mean back to dull music though. Nothing gets me in the mood for some retro game time than a good ol' Shoot'em Up! So it's time for a quick look at just a few of the choice tunes from the soundtrack of exceptionally difficult shoot'em up, Darius Twin. (Okay, so they're all difficult shooters to me, but that doesn't mean the soundtrack is hard on the ears! In fact, it's quite easy on them and downright fun and...well, you'll see, I mean hear.)

Fun, energetic, and inviting; the first track you hear in the game has it all. I like the digital sounds and synthesized horns that permeate the track. Sometimes there's a bit of "cheese" factor in shoot'em up music that can really bog a soundtrack down. Some shooters have tracks that should engage you but instead leave you muting the sound and turning on the Metallica. Not so with Darius Twin. It gets you pumped up from the start, and it just keeps getting better.

The action turns up in Zone D or "Lankus" and although the wailing sections that permeate this particular track aren't my favorite, they have a feverishness about them that I enjoy. I don't know if I'd listen to this track separate from the game, but when it plays it really helps me not to mind getting blown apart time and time again. Speaking of time and time again, let's talk about the boss theme.

I never was able to get that far in Darius Twin, but I appreciated the separate boss music when I actually got to hear it. It felt like a reward in itself to not only have gotten far enough to have a boss battle, but to also hear the music which added to the experience.

Admittedly, I had to go to Youtube to hear the full soundtrack as I really haven't managed to get the knack of old-school shoot'em ups to the point I can beat them. It was great to hear them all and cycle through and find the songs I enjoyed the most. I tried to avoid listening to the end music, as I'd really like to hear that in all its glory one day as it was meant to be heard--meaning when I eventually beat the game...I hope. In any case the soundtrack to Darius Twin has the energy and pop you come to expect from early 90's shooters, and that's not a bad thing. I feel like too many modern shooters go for a bombastic, serious tone rather then a bit of pep and cheese; either that or they slather it on too thick. What's wrong with a bit of overly exciting music? I'm not playing Batman all the time, so why does some shooter music today sound grim? Anyways, if you haven't had a chance to hear the soundtrack to this game, check it out and find a way to grab an MP3 for it. It'll take you to time when blasting through a fun shooter meant also blasting through a fun soundtrack as well.