Opinion: The Re-Rise of Nintendo 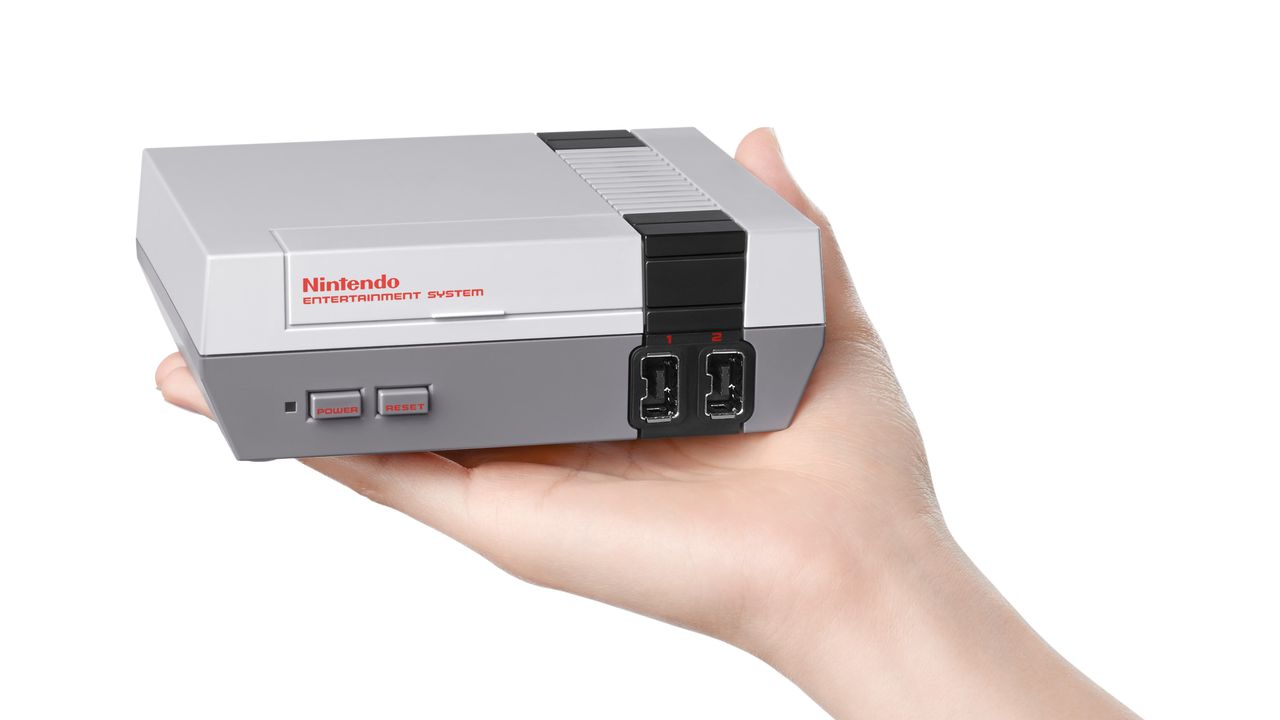 Whether used in front of a back drop or just shown on a stock white background; this image of a hand holding a miniature original Nintendo Entertainment System aloft like a waiter about to serve you a delicious portion of retro gaming goodness has made the rounds in a big way. But there's more going on here than people simply "geeking out" or seeing an opportunity to play a sample of the best games in one simple package. It signals not only the premiere of another emulation system, but the return of Nintendo as the dominant system makers next console generation. Why do I make a such a bold claim?

The Rise of the Retro Gaming
For several years now, collecting video games, specifically retro games, has gained not only in popularity, but momentum as well. What once was just small-time hobby for some and a chance to replay childhood favorites has morphed into a fun and ever more popular pastime . Collectors and gaming geeks of all ages will avidly seek out everything from Sega Master System to Turbografx 16 to even the old Pong consoles. Anywhere from Craigslist to Ebay to local garage sales can yield gaming gold. However, the most coveted of these finds are almost always those dealing with Nintendo, specifically the original Nintendo Entertainment System, games. As this interest has risen it has spawned countless Youtube creators with content devoted to the beloved NES, blogs such as this one, and various "Twitch Plays"--what once a niche hobby has transformed into a trip down memory lane by many 20 to 30 somethings.  While Xbox and Playstation are promising ever increasing eye-candy and more-of-the-same-First Person Shooters (FPS), Nintendo has gained foothold in people's heart by reminding them of their great past. Mario has become this generation's Mickey Mouse. Many people have an affection for Nintendo that even they may not realize, and that leaves them primed for something fun and new.

E3 and the Breath of the Wild

The increasingly irrelevant E3 showcased the usual hodgepodge of upcoming releases and plans for system upgrades meant to catch the attention of consumers and creators alike, but for the most part it was underwhelming. Playstation upgrades? Xbox upgrade code name Scorpio? Interesting, but not interesting enough, least-ways not interesting compared to the fully immersive display at this year's E3 that was Nintendo's Legend of Zelda: Breath of the Wild experience. Boasting a demo that reportedly could take up to three hours to finish, Nintendo made a big splash with a long overdue playable demo for the next installment in one of its biggest ip's.  For days afterwards, tech and gaming blogs were talking about how it compared to other games with open-world concepts, speculation on whether the long wait will inevitably be worth it, and what the game meant for Nintendo as a whole. Microsoft and Sony plans for the future were given a few articles here and there, but no where near the coverage of Nintendo.

Ah, the "NX controller" that we've all seen. Yes, it's a fake and there was even a recent attempt to sell a fake one on Ebay. Even though it's a fake, and has to be pointed out as such seemingly every other month, there's a contingent of people who seem hellbent on criticizing every move Nintendo makes in regards to the forthcoming NX. Naysayers of the NX aren't strictly limited to the XBox fans or Playstation enthusiasts though, even business insiders seem to heap criticism on Nintendo with reckless abandon. I can't even begin to speculate as to why there are some who seem to have nothing better to do than pick on one gaming company, especially one as devoted to just having a good time as Nintendo is, but I digress.  All the speculation from controller design to false rumors that NX will be digital download only have only served to continually keep Nintendo not only in the spotlight, but has also kept the public yearning to know more and to separate fact from fiction. PS4K and Xbox Scorpio announcements have made it clear that Sony and Microsoft intend to pursue VR tech as a possibility in the future. The tech for VR still remains barely out of infancy, yet there's an interesting conundrum here. Consumers know where Sony and Microsoft are headed, and they've seen VR helmets everywhere from the cover of Time magazine to Amazon to cheap knock-offs in their local mall. By the time these two companies or 3rd party developers can even start to produce games for the upcoming VR technology, it could already seem like yesterday's news. Nintendo hasn't put all their cards on the table yet, and this makes people interested and even excited to see just what they have in store.

By the time you've finished reading this article, thousands more people will have already signed up for the fastest growing mobile game in recent history, Pokemon Go. Whether you think of it as a fun way to get in some exercise, a trip down memory lane that comes with augmented reality, or even if you are a joyless soul who likes to post memes about how much more "adult" you are for not playing Pokemon--you cannot deny Pokemon Go has become a bigger smash hit than possibly even Nintendo anticipated. Server issues notwithstanding, the game has actually had a societal impact and for a game that hit mobile gaming barely over a week ago at the time of this writing that's huge. Retailers are trying to figure out how to set up there businesses as virtual gyms, people are wondering around malls and parks talking with one another about the Pokemon they've caught, and Nintendo is raking in billions of dollars. They've gone from having no interest in mobile gaming to utter domination in a single app. Pokemon may have hit the scene 20 years ago, but thanks to multiple sequels and the enormous success of the Pokemon Go app, it's as fresh in people's minds as it was when it first premiered. From memes to terrible political jokes, everyone is talking about Pokemon Go; and this means people are talking about Nintendo.

End of the Console Wars and Nintendo's (Likely) Upcoming Victory

No, the title of this last section doesn't show what a Nintendo fanboy I am. (Or rather, it doesn't only show that.) What I mean by declaring an end to the console wars is that I think we are entering the last cycle of consoles with physical media. In an increasingly digital world where games are more and more often downloaded; it's hard to imagine the idea of going out and getting a gaming system lasting much longer.  Not that I think we will all switch to PCs, but that innovation needs to come in a form other than VR tech next.  We need an inbetween step, and Nintendo may have found it.  Rumors have circulated for months now that Nintendo's newest system will feature a hybrid mix of console and portable gaming. If these rumors prove true, Nintendo, already the dominant force in portable gaming, will likely find themselves on the forefront of something not only eye-catching, but truly innovative and enjoyable as well.  It won't just be a fad, but it will be the next step in gaming.


Of course, my speculations could find themselves proven totally false and unworthy of consideration, but it's fun to think about and that's okay. After all, didn't the late Satoru Iwata say that's what video games should be; fun?