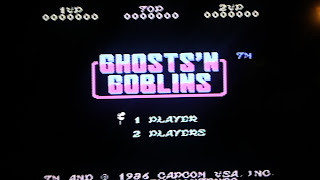 
Hard games can sometimes act as the gateway for our memories. We look back and say things like "Nintendo Hard," when it comes to certain cartridges of the Nintendo Entertainment System's heyday.  Ghost'N Goblins by Capcom easily enters that pantheon of retro gaming with the "Nintendo Hard" label with its difficult jumps where there was no turning back, relentless enemies that literally spawned on top of you, and one-touch deaths all set against a back drop of sometimes pant-less knight on a quest fighting the forces of darkness. When playing this game as a kid, I readily remember not just the frustration of barley making it to level two, but being absolutely convinced that the game was cheating somehow. (This was in the time before we knew games like Super Mario Kart really were cheating, but I digress). So, was it just as frustrating to play as an adult as it was a kid?

You are King Arthur, and one day while courting the princess Prin Prin none other than Satan himself comes along and kidnaps the object of your affection. And so begins your quest to, what else, rescue the princess. While the scenario seems familiar, the added bonus of fighting the father of all lies is a nice twist on the genre. You battle your way through zombies, ghosts, demons, and an assortment of big boss fights on your quest to defeat Satan and rescue Prin Prin. Along the way you can collect various weapons, such as torches and knives, and power ups ranging from simple point bonuses to extra lives. Each time you get a weapon it replaces the previous weapon you had, and you even keep that new weapon after you die--until you acquire a new weapon. The challenges in the game can seem on the unforgiving side as you have no control over your character once you make a jump. If you mistime a jump on to a floating platform, there are no Mario-physics to help you undo that jump, you are committed. Flicker is also a minor issue here. Though it's impressive the game can get a number of sprites on the screen at the same time without too much in terms of slowdown, flickering can sometimes cause difficulty in tracking the various monsters.

One of the more notorious "features" of Ghosts'N Goblins is the, "false ending/untrue ending" you get after beating the game. As it turns out, you have to beat the game twice in a row in order to truly win and receive the proper ending. The game had no passwords, so were you to manage to navigate your way through Satan's minions and defeat him, you had more of the same to look forward too. At the time, I had no idea that when games did this sort of thing, it was a way to artificially extend the game and keep you playing. Today, we tend to think of it as just adding to the frustration of the game itself.

I like that the backgrounds for the game are always pitch black as it helps set the tone of game. With monsters that sometimes boarder on too colorful, (red, white, and blue zombies?) to enemies that can look like a frank in a blanket--the game needs some darker colors to help make some of the monsters look scarier. Now, the red gargoyle demon and little trolls looked evil enough on their own, for sure--but those monsters weren't all winners.

For what it was worth though, a great job was done on the detail when it came to the monsters, tombstones, ladders, trees, and the various elements that provided setting for Ghosts'N Goblins. The sprites may have flickered, but I wasn't noticing them so much and I think that was because of the details thrown in by Capcom.

As far as music goes, I don't know that I have too much more to add from my separate Midweek Music Box about Ghosts N Goblins. Everything I said there still applies. The tunes create that horror movie feel and make the soundtrack an instant classic. It's hard not to think of the music for the first stage just seeing the image for the game:

All the music tracks in that game have this appeal. With literally hundreds of games on the Nintendo Entertainment System, it was could have been difficult to make a soundtrack that stood out. Capcom was in their prime here not only in game making, in sound composition. Ayako Mori created a sound and feel for this game that puts you either in the mood for hard gameplay or Halloween. Sometimes both. Also, as a lover of the harpsichord, I have to say that hearing the NES do it's best to emulate that sound is pretty darned cool as well.

When it comes to sounds used within the game. It's not half bad. I know that AVGN said the odd-flying hot dog-like creatures were annoying with the high-pitched squealing noise that they made, but I guess I find it midway between annoying and atmospheric. Admittedly, the sounds are lackluster compared to not just modern games, but even games from the same time period. But when you think about it, the creepy/annoying sounds work for the tone of the game. You are in a land filled with Satan's minions; of course they are trying to freak you out by squealing and growling at you.

Castlevania shares a large brunt of the reason why this game was so much more difficult back in the day. Why is that? 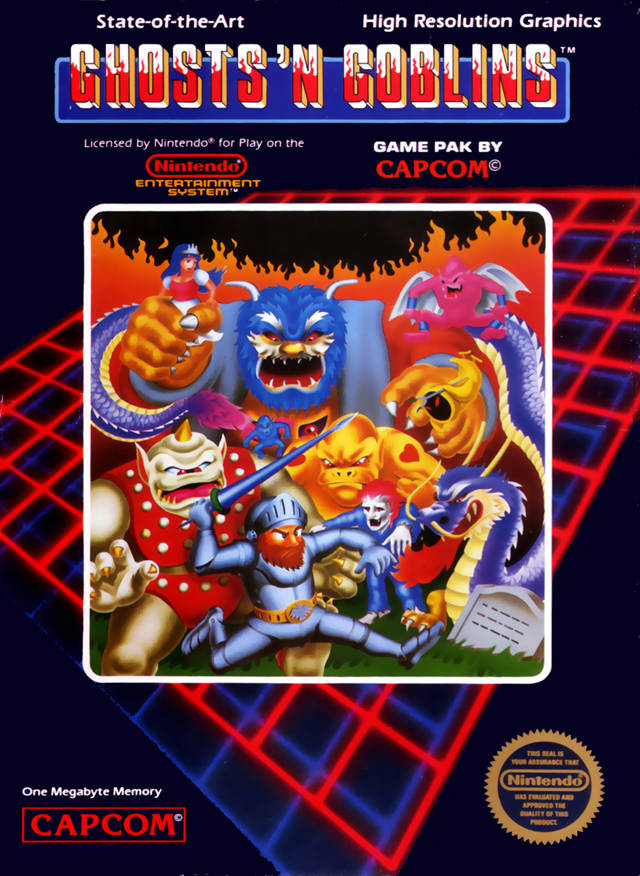 I had already rented Mega Man, Section Z, and Gun.Smoke by the time I got around to trying this game. I knew that even if the game was hard and at times frustrating; that it was Capcom and Capcom meant was "State of the Art" just like the boxes promised. I have to say that the two times I rented this were some of the most aggravating experiences I've ever had on the NES, second only to Cybernoid. Had I known that the knife in Ghosts'N Goblins was the weapon to have, I think my experience could have been different as a kid.

I mean, come on! As a kid, everyone knew that you used pitchforks and torches to fight off monsters. You'd think that this would be especially true of a game with a horror movie type feel. Nope. It was and always has been the knife. I have Angry Video Game Nerd to thank for that bit of knowledge entirely. If I had to guess why a seemingly simple dagger trumps a torch or spear, I would guess it has something to do with the animation. The spear is a large object that explodes when it hits an enemy. The torch lets loose with a nice tall wall of flame if it hits the ground. When you lob the knife, it has less pixels to animate across the screen, has a relatively quick "shatter" animation when it hits, and if you miss it goes across the screen quickly--meaning you can throw a new one more quickly. Again, these are totally layman guesses though.

As it stands, playing this game decades later can still lead to frustration. Death comes easily, and quickly. However, knowing that the what I once took for granted as the weakest weapon was, in fact, the best one, makes it a little more likely that I may actually see the end of this game. 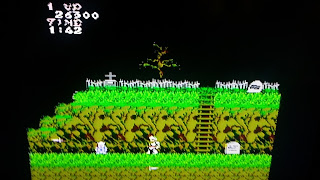 If only I could get a bit further than the first level now that I actually know all this...