If you asked me about this game, Bad Dudes, I would have told you how much I loved playing the game. I would gladly answer the call back then and I would answer it now: 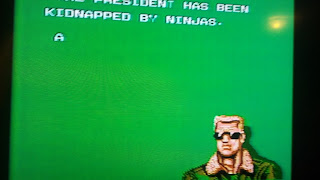 I don't know if I was ever a Bad enough Dude to save the president from Ninjas, but what I did know was that fighting ninjas sounded awesome back then, and frankly it still sounds awesome now. Politics or no, if I was asked to embark on a potentially deadly mission where I had to fight ninjas in order to save the president, I'd jump at the privilege. Even if I died, can you imagine the tombstone, "Died of Ninjas?" How many people in the world would get to say that?

In any case, I had this long, fond nostalgia tied to the game. I was prepared to wax nostalgic about how the game still holds up on a few levels as a decent beat-'em up.   However, it turns out that I have a long, fond nostalgia for a game called Dragon Ninja for the Amiga, a computer I spent many hours gaming as a kid, but sadly no longer have access to. My brother and I loved playing the game. Sure, it took forever to boot up, but we had a blast and the music was pretty good, and still sounds good now. Take a look:

Everything about this game, the one with the cool video above? That's everything that the NES version was not.

We're talking about this one...
Gameplay:

You are one bad dude, not to be messed with, and yet evil ninjas have kidnapped the president and you must battle your way through a seemingly endless stream of ninjas who don't get the point that you are, indeed, a bad dude. Or at least not to be messed with. You scroll along in a fairly flat looking 2-D world made up of train rides and what looks like a world tour of industrial areas. One thing about the standard beat'em up was they were light on plot, usually a "rescue the princess scenario," and bad guys throwing themselves at you left and right. Power ups such as weapons, soda to refill health, and clocks to extend time are sometimes dropped by enemies, but never in amounts that feel satisfying. It's hard enough just making it through regular ninjas, let alone getting to the end of the level. You proceed either right or left, depending on the level, punch to death all who stand in your way, and fight an end level boss. Again, pretty standard stuff.

It's so blocky and chunky, I just don't know where to begin.
Granted we are talking a 1989 NES game, but I feel like the odd, stuttering movement has almost no excuse. Sure, Double Dragon didn't exactly have you full articulated, but games like the original Teenage Mutant Ninja Turtle were released this year as well, and the movement wasn't distracting like this was. As far as style goes, it just seems so...dull. I remember a joke about 1970's era Doctor Who was that they constantly shot in rock quarries and corridors due to budget constraints. Why not have a level where you go across mountains, or deserts or...or...anything but another train and another industrial yard. I get copy and pasting stuff with a slight palate swap was easy, and probably well in some budget of some sort but...man. I know the Amiga version, Dragon Ninja, had the same locals, but it had better graphics overall, so it was easy to ignore when you had that repetition. NES games? If the game itself isn't engaging, it really sticks out.

Unlike my previously reviewed "Totally Rad," Bad Dudes only gets the title right when it comes to talking 80's/90's 'tude era stuff. Everything from the punches, to the hits, to the poorly digitized voices make me yearn to put in the Amiga version. Only I don't have an Amiga on me, all I have is tinny sound effects and this, this for a soundtrack:

Forgive me, I had to do my duty to today's blog and share the track. If you really like this version of the track, please give the Amiga version a try. It has a feeling that just has so much more going on, so much more 16-bit feel. So much more...everything.

As I may have mentioned before, I loved the Amiga version. My older brother and I played this game so many times on so many weekends. I am pretty sure that we never beat the game as we would run out of lives and continues before the end, but watching the let's play I posted a link to above, I can see that we got to what appears to be the next-to-last level. I could easily go off about how superior the Amiga version is--oh wait, I think I have. But I think the reason I have gone off so much is because of how spectacularly Data East let me down with this port. I honestly can't recall if I ever rented this version. I don't think I did, and I'm glad I didn't. I can forever hold my Amiga memories on the pedestal they belong on.

When I picked this up at a local gamers swap, I was so enthused, so ready to see if I was a Bad enough dude this time around. Would I save the president? Was the Nintendo Entertainment System version on par with the Amiga Would I beat an entire army of ninjas?