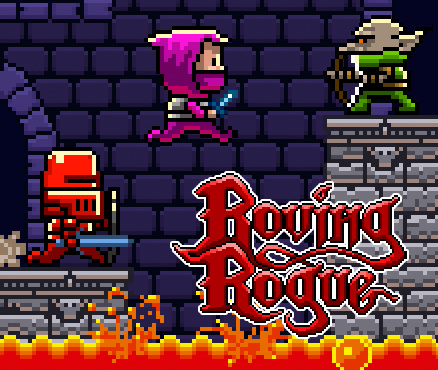 Kurt the Righteous stands triumphant over the fallen form of an evil magician and his would-be apprentice!  A winner is you!  Time to roll the credits, silently thank the makers of the game and then......well, then what do you do after the bad guy has met his demise?
Why you head back the way you came and claim your reward of course!  But no one ever said the trip back would be easy.  The crazy castles and dangerous dungeons you fought so hard to find your way through need conquering again.  And all those goblins and spear wielding soldiers that populate those areas?  They don't seem too happy with you for having slain their master and left them unemployed...

In Padaone Game's platform puzzler game Roving Rogue you play as Kurt, a fellow with the unique and quite helpful ability to teleport a several feet ahead--even through solid walls!  So what does happen to all those heroes when the ultimate evil has been vanquished and the day saved?  Rogue attempts to show what happens in a humorous way, but does it succeed?

When it comes to control, this is where Roving Rogue really excels.  Though it might take a few tries to get used to the teleporting mechanic and how to properly finesse certain jumps; once you do get used to it, you'll find yourself trying to master various ways in which to beat levels as efficiently as possible.  Several times while playing I found myself goofing around just to see what was possible in terms of moving around the screen while teleporting.  It's fun to use and highly satisfying when you are able to land several difficult ledge jumps in a row followed up by a teleport or two.

With bright and colorful character sprites and smooth animation, what's not to like about the pseudo-retro look of  Roving Rogue?  Much like 1001 Spikes and Shovel Knight, Roving Rogue does a quasi-emulation of the 8-bit to 16-bit era of gaming.  As a fan of retro games, I do like the style and like seeing it pop up from time to time in more modern games.  It's neat to see what developers can do with a wider color palette while still using the style of an older area.

That said, the game doesn't bring anything "fresh" so-to-speak to the table.  While I love the style, I sometimes feel that it can get a bit gimmicky at times.  It's fine enough here, and I like that there's a bit of parallax scroll going on.  It's just...well, even retro emulation can feel a little vanilla at times.  Almost like it's a given in action movies that the hero will toss off one-liners, it feels like a gaming given that a retro-esque game will have a warm and familiar look.  Again, this isn't meant as a knock against the style, just that it is what it is and nothing more.

Ordinarily I like to link to a sampling of music from the game in this section, but as of the time of writing, the best I could find were trailers for the game itself.  That said, there's nothing overly noticeable about the music.  It does have a charm to it, and it certainly helps to get you into the mood of the gameplay, but it doesn't feel inspired or as thrilling as it tries to be.  Not that I'm knocking it, just that it's pretty much par for the course for a game like this.

The "wooshing" effect that plays as you teleport around to various points on the screen helps to both sell the tone of the game and seems fitting for the assassin meets magic look that your character sports.  Other than that, not too much stands out when it comes to sounds.  I'm not sure if that's a lack of imagination or just a mistake on the part of the design team thinking that because the game sports a retro look, that it must mean there isn't much to offer in terms of sound design.

You teleport through certain walls and not others in order to reach the little red door at the end of each level.  Along the way in your backtracking quest there are traps, enemies, or sometimes level features (such as rising lava) trying to kill your little guy.  There are little check mark flags throughout the level as you progress, which is a nice feature because although the game gives you unlimited lives; dying before you reach a checkpoint can send your character hurtling back past previously conquered traps and enemies.  Not that this challenge proves overly annoying, just after several resets the fun of individual levels can wear off.

A particularly interesting, and sometimes annoying mechanic of the game comes in the form of your character's inability to attack enemies anywhere except for directly behind them.  Not that I'm about to decry the back-stabbing encouraged here, just that it almost feels like Padaone Games was trying to add something reminiscent of a stealth mechanic to Roving Rogue.  It feels unnecessary and only added to my frustration along the way as I would occasionally teleport at the wrong time and an enemy would pivot into my guy and instantly kill him for his ill-timed jump.

Roving Rogue is a fun enough game and all, but once you get past the goblins and the poofs of purple smoke, it feels like a wasted opportunity.  Roving Rogue does have a unique charm to it with the teleporting mechanic and the way the storytelling is told from the end to the beginning.  There's even a bit of cuteness in the way the game does the main character's narrative and plot development via Twitter-esque scroll "posts" and a storybook read from end to beginning.  Also, I like that there's a bit of mystery going on as you have somehow forgotten just what it is your quest was about and the only way to help remember is by picking up little statues placed throughout the levels.

However, there's something about the game that just feels a little too forgettable.  Although you are offered the opportunity to replay levels and attempt to achieve a better overall outcome (less deaths, more statues collected, etc.) I don't feel like there's enough incentive for me to do so.  There's an interesting multiplayer mode available, but as I don't really have game night at my place and my wife doesn't play video games, I likely won't ever be able to comment on this feature.

The game is solid overall with nice designs and pleasant enough gameplay, but suffers from a lack of uniqueness in an already crowded platformer marketplace.  It reminds me of summer movies that are enjoyable enough at the time you watch them, but if asked about it in a month you'd have a hard time separating the plot out from one of a dozen other similar films.