Satisfying or Shovelware Vol. 3: A Satisfying Week of Cheap Games

Do you ever pop over to the eShop for the Wii U only to be met with a baffling bevy of bgames? (Sorry, couldn't think of a "b" word for games.)  Do you wonder if you dare drop a dollar or two and take the risk of cash going down the tubes?  Or maybe you see it as a chance for a fun gaming experience that you don't want to miss out on.  Whatever the case, we've all faced the dilemma of whether or not something will be great or garbage.  That must mean it's time for another installment of Satisfying or Shovelware!  Time's a wastin'...or will time be a wasted?  Let's find out! In Kung Fu Fight by Nostatic Software you are a kung fu master who must kick, duck, and jump over hay bales, ninjas, sumo wrestlers and other obstacles while running non-stop in a quest to rescue your girl from an evil ninja master.  Here we have another runner game trying to copy the style of gameplay that was perfected by Gaijin's own Bit.Trip.Runner and Runner 2.  Kung Fu Fight! offers varied backgrounds, interesting enemies to avoid, and various unlockable difficulties as well as awards--all done in a retro-esque style.  Kung Fu Fight! has a goofy premise, but it takes full advantage of it with tongue in cheek text bubbles uttered by your character as you race along along as well as silly enemies like the aforementioned sumos.  The music is nice but nothing special, the sound effects help give a sense of satisfaction as you punch through enemies and obstacles, and the controls are smooth and responsive.  I only have two minor complaints about the game; the first being that you must complete the game on normal mode before you get to play the subsequent harder modes.  I just want to see how insane things get from the start and though I enjoyed the game I can't see wanting to beat it three different times just to unlock all the difficulty modes.  The other complaint I have is the button placement.  Like I said, the controls work well.  However, you use the "X" and the "A" button to punch and jump and this just feels odd.  Why not "B" to punch and "A" to jump?  If you're doing a game with a retro style, then why not emulate the controls as well?  Again, not a deal breaker and the game is cheap enough that it's worth a download.

In Land It Rocket by Petite Games you must pilot your cute little pink rocket from the start point to the cute little pink landing pad.  Sounds simple, right?  Well, before I forget to mention them, there are friendly yellow walls, cute little missile launchers, and cute little death spikes that block your way to said pad.  The game plays in a satisfactory manner with tight controls and decent physics, once you get used to them.  There are dozens of levels and variations of traps and walls which keeps each stage feeling like a fresh puzzle to solve. You are awarded stars for how quickly you get the rocket to the pad, with a maximum of three stars possible.  On the one hand it's nice to see an actual reward for the better you play the game, and the game even tells you how close you were to getting the two or three stars possible.  However, there is no on screen timer and no pre-stage definition of how quickly you need to beat a level to get said stars, which is a little disappointing.  The music is nothing really to talk about, in fact, I can't even remember it as I sit here typing.  The game does have nice bright colors though, and the color scheme reminds me of any given episode of the Power Puff Girls.  The shapes are simple, but all the more fun for their simplicity and there are some nice background animations such as clouds moving, leaves falling, and waves moving up and down.  Again, these are done in simple shape form such as triangles, squares, and circles, but this just makes the game feel all the more pleasant for it and not that they were "copping out" in the design department.  The game could use a tweak here and there with better music and more clearly defined timer goals, but it still was fun enough that I'd likely play it again if I had little bit of time to kill and didn't want to get too involved in something. 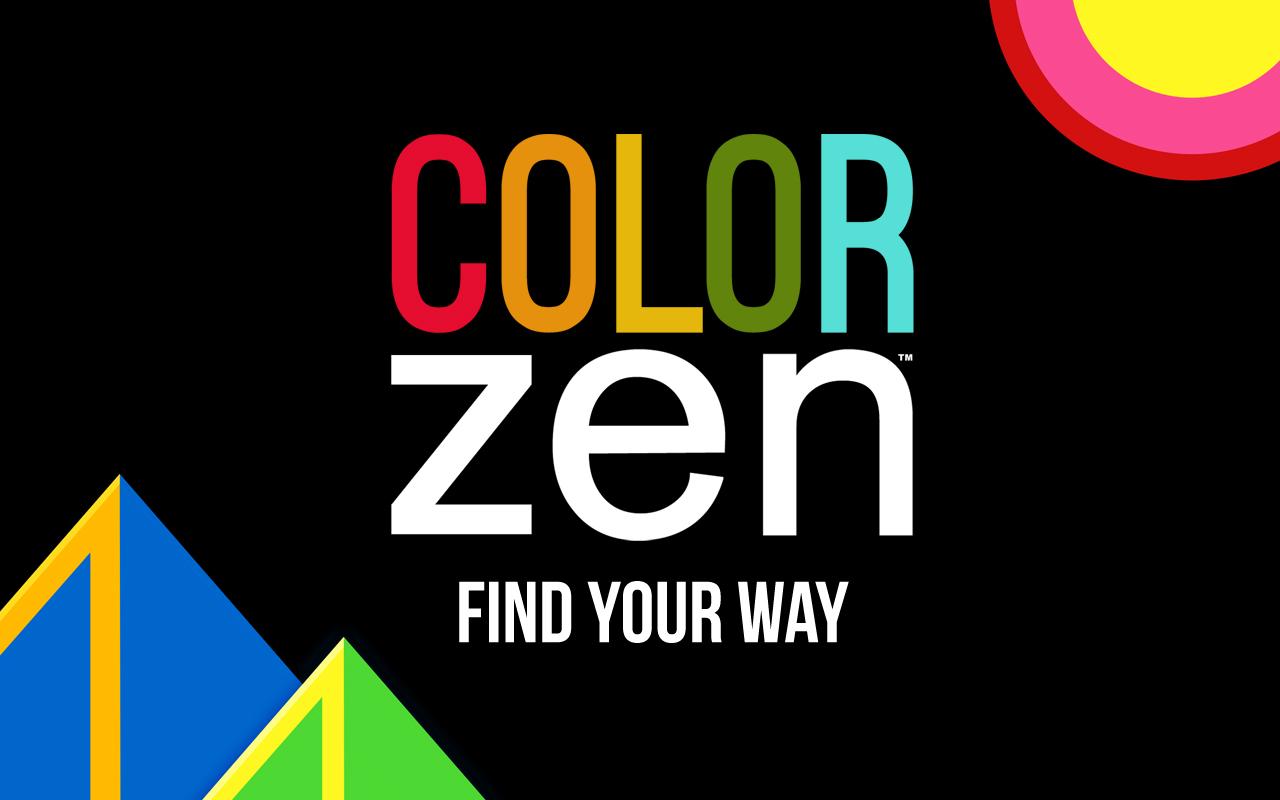 There are no space pirates, no eternal forces of darkness and light locked in eternal battle, and no princesses needing rescue from castles.  For in Color Zen by Large Animal Games there exists only pleasant music, simple shapes, and color based puzzles that needs solving.  The pleasant synthesizer pop music feel of the soundtrack reminds me of something you'd hear in the background of an 80's movie that was taking a guess at the kind of music we'd all be listening to in the distant future of the 2000's.  Really though, the music is peaceful and relaxing and it helps set the tone the game designers were going for. Gameplay consists of you using the Wii U Pad to glide various shapes of similar colors into one another so that they fill the screen.  For example you touch a purple triangle to a purple square and the screen fills in around the remaining colored shapes up to the boarder with the color purple.  You need to be careful in what order you trigger the colors though as the objective is to have the last color to fill the screen be the same as that of the boarder.   If you do it wrong, it's game over.  And...that's it.  Just color matching and pleasant music.  No hard mode, no timer.  Just colors and music.  True the game lacks depth, but it doesn't need that as the game is more about inducing a state of calm in the player.  I guess that's why they call it Color Zen.  It's not overly addictive, but at the same time you'll find yourself wanting to play "just one more level" before putting it down.  I really like this game as I've actually used it a few times to unwind late at night when I had trouble falling asleep.  Not to say that the game is boring, just that it has a smooth pleasantness about it that makes me want to nuzzle into my easy chair and drift off.  Not to mention it's a heckuva a lot easier to drift off to synthesizer-esque music and basic colors than it is to a space marine yelling in your ear about alien forces--but I digress

Don't get me wrong, there's a whole lot of  garbage games or games that seem like they'd be better off going on the free side of somewhere like Facebook or Armor Games.  (Not to knock the game makers, but these aren't triple A games by any means.)  So when you come across a game that's five bucks or less and it's not an original Nintendo game made available for download, it's natural to feel skeptical.  I say this as a bracer because this time around I winded up actually liking all the games I downloaded.  It was like pulling the lever on a nickle slot machine and getting all cherries.  Sure the payout was small, but it was still satisfying nevertheless.  So this week yeah, all the games fall under the satisfying category, but don't you worry.  Just as surely as there are great payout days, next time around I'll probably strike out but pull that lever again hoping against hope that I don't get three little pictures of garbage.

So there you have it, a fairly satisfying week all around.  Sometimes shovelware is kept at bay and you get round up a some pleasant little gems that are fun to play and a nice diversion.  Remember, none of these are really games that are as involved as a regular game you'd pick up from a Best Buy or Target, but each of them is trying to offer a little something you may not have know you wanted to play.  If you like the games or are interested, be sure to check them out.