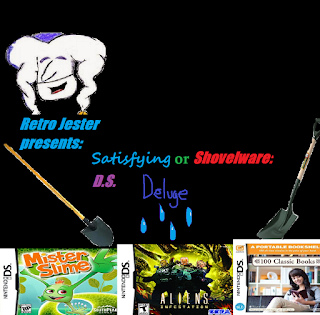 An anthropomorphic lump of boogery goo?  Aliens, corridors, and a limited supply of marines?  BOOKS on a game system?!?!  Have we entered into madness?

NO!  We've entered Satisfying or Shovelware where I take a quick look at a group of games and see whether they are worth your time to pick up or belong in the dustbin of history.  This week we branch out from downloadable Wii U ware into the physical realm of DS games.  Most of these games you can find at a Game Stop or the discount bin of your local used game store.  The question of course remains whether you should snatch them when you see'em or leave them for some other poor soul--I mean more interested gamer--to retrieve. 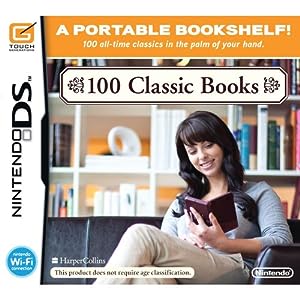 Books on a game system what strange madness has come to pass?  This collection of books is pretty much what the box claims to have.  Pop it in your DS, hit the switch and BAM!  You'll have access to 100 classic books ranging from Moby Dick to selected works by Shakespeare.  The interface for turning pages and reading the books is user friendly and selecting books from the virtual shelf is amusing as is the page turning effect.  It even has a nice bookmarking feature, but it only let's you bookmark one book at time so no switching over from War and Peace to Othello for you!  Since you're dealing with a DS screen, the amount of text displayed will naturally be limited more than it would if you had a similar collection on a Kindle or say--a real book.  Shorter novels easily turn into a 1,000 plus page epics, but don't let that daunt you as it's just an artificially inflated number thanks to the limited text space.

Some of the book selections seem a little too random and if you aren't into classic literature it might take you back to the worst parts of high school English class.  Being a bit of book worm I liked it, but personally I did wish Treasure Island was on here rather than some of the other writings of Robert Louis Stevenson, but that's just the English nerd in me speaking I suppose.  Overall though, I would really recommend picking this up and popping it in a portable game case for your DS if you're anything like me and sometimes head on a vacation but forget to bring reading material yet always remember to bring a portable gaming system.

Final Verdict:  Immensely Satisfying (for book nerds like me) 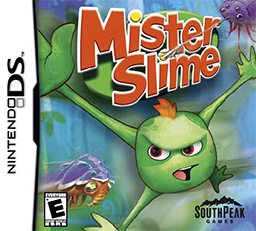 Mr. Silme looks like an unpleasant lump of left over booger with a creeper like smile leering at you from the shadows.  I think SouthPeak Games may have been trying to create a cute mascot much like Kirby, but Mr. Slime is just too unpleasant to look at.  Whatever the original intent was of turning this character green, it backfired.  Sadly, it's not just looks where this game falls short.

Do you like extraneous back stories for uninteresting characters?  You're in luck, because Mr. Slime has tons of it before you are allowed to even play.  Even trying to skip through dialogue takes a long time.  There was a wall of text explaining a long and continuous cycle of war and peace in the world of Mr. Slime and it was waaaay too much backstory when your character looks like the remnants of a used tissue.  I mean, really?  What the heck do I care about this disgusting blob's backstory?  Likely him and his whole species will be wiped out in the near future thanks to a hearty nose blowing.

I will say this, it does have good mechanics and nice control.  Reaching from one floating pylon to the next to get to the exit works well and making use of the natural stretchy quality of Mr. Slime feels satisfying.  And that's where the satisfaction ends. Remember that stretching from pylon to pylon and reaching the level exit I mentioned a sentence ago?  Well that's it for gameplay, that and grabbing items for points.  Apparently whatever struggle Mr. Slime and his kind engage in involves dominance of these little pylons.  If there's more to the game I don't know and don't care as getting through the first few levels and it's tedious hand-holding with more un-skip-able dialogue bored me to tears.  For a more satisfying Mr. Slime experience, I recommend blowing your nose.  If you want to experience the game in "virtual" form, explain to yourself why you blew your nose and how it some how affects the fate the planet. 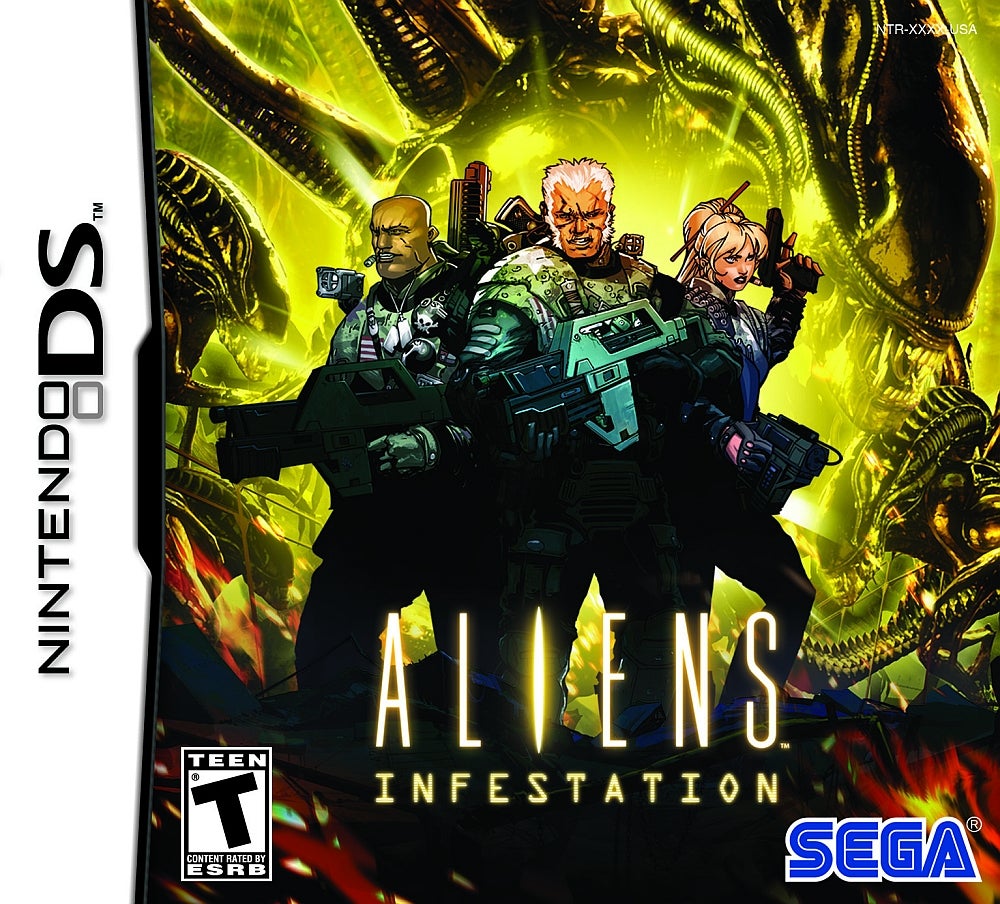 Set between the movies Aliens and Alien 3, in Aliens: Infestation a band of marines are investigating an adrift spaceship and determined to rescue the life form detected aboard.  Obviously whatever still lives on this craft can't mean anything good for the marines, after all, this is the Aliens universe.

You start off with four marines, but there's the possibility of meeting up with more marines and having other characters to play as, each character has their own unique in-game dialogue making each one feel different in a satisfying way.  Unlike other games where if you die you just restart as that character, in Aliens: Infestation once a marine dies, he's gone.  You can keep playing until you're out of marines including the found ones, but once the last one dies it's Game Over man, game over!  The game has a Metroidvania feel as you wonder corridors, finding key cards to unlock new areas and gain new weapons and tools.  At first you are left wondering when you get to square off against the aliens and you might think at it's you're going to be fighting robot guards the entire time, but just hang on because soon those deadly xenomorphs show up and you fleeing in no time.

The controls are solid and maneuvering corridors while firing you gun is extremely satisfying.  The gun and motion sensor sounds are straight from the movie and they really help add to the atmosphere of the game.  Although the music adds to the game as well, I found it a touch too loud and really wish there was a way to turn it down or off entirely to help add to the over all spookiness of the game.  I would recommend throwing on some headphones while playing to get the full effect of the sounds as it really does a great job making you feel like you are a part of the aliens universe for being a handheld game.

I picked up this little gem from a local Game Stop for less than four bucks and it was well worth it.  I was pleasantly surprised since I went in with a bit of bias against the game because of it being loosely based off a movie franchise.  Glad I took the gamble and I think you should too.


That about wraps it up for this installment of Satisfying or Shovelware, I hope you find some cheap gems out there as well and if you do, let me know.  And if you find some garbage as well...well, I might give that a shot too.