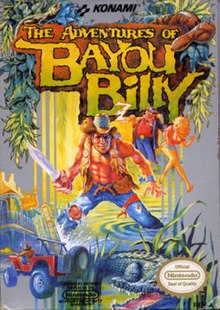 Ready for a little interactive exercise? Okay! Cup your hand over your mouth and repeat the following phrase, "The Adventures of Bayou Billy!" Congraturations! You just did a spot on impression of the opening audio sample from one of the hardest-and possibly worst--games that the NES had to offer.


As I've said before, most of the time, back in the glory days of the NES, you could count on good ol' Konami (before they went bat-poop crazy) to churn out fun games with great sound, decent graphics, and of course, fantastic gameplay.

But let's get honest here, Konami was just as capable back then as they are now of making bad games and bad decisions before the whole, "Let's treat our top programming guys like a festering pile of dog innards," thing.  After all, bad decisions gave us the game that was The Adventures of Bayou Billy.  I rented this game at least three different times, trying to convince myself that I just wasn't trying hard enough to beat the game. That somehow I was the one who was lacking, not the game itself.  Heck I even remember getting all pumped up to play it again after I watched the Bayou Billy episode of "Captain N: The Gamemaster," somehow convinced that the goofy story held game secrets I had missed. 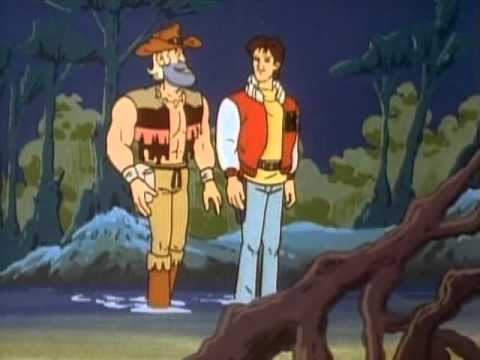 "Ya see Captain, the only way to beat'em is skip leg day. Always."

Well, the only secret it held was that I'm sure there's a life lesson I could pull from this today: the writing was at times terrible and I was too young to understand that there weren't warp zones in every game out there.  Mario pipes weren't suddenly going to connect to Metroid. So there's probably something about not trying to live up to unrealistic expectations or perseverance and hard work might have paid off if only I worked harder at trying to play the game rather than looking at every available source for hints.  So, since there weren't warp pipes in Bayou Billy, what kind of game is it?

The game itself is pretty straightforward. You are Bayou Billy, and the evil King Bowser--I mean Godfather Gordon--has kidnapped your sweet-heart princess...I mean Annabelle--and it's up to you to rescue her. Along the way you'll punch your way through crocs, bad guys, and super-human mutants who seem impervious to damage, despite your obvious buffed up chest and ability to wear only leather vests to draw attention to the chest. On the plus side, the game changes things from a standard beat-em up formula by incorporating driving stages and even has levesls that use the light gun! ...and that's about where the excitement begins and ends.

Godfather Gordon's stooges seem to have way more stamina than Bayou Billy. Whatever fakery that bearded shmuck was trying to pull off with the stubble and ripped bod, falls apart the instant you start fighting bad guys. Billy has no where near the toughness needed for the fight! Even now as an  adult I find myself pummeled like an 80's Revenge of the Nerds, nerd rather than dealing out the pummeling via the Crocodile Dundee rip-off Billy was meant to be.

The sound design is about what you'd expect from Konami, with many familiar audio bits gracing the game.  I think the soundtrack was okay with plenty of beats and a nice little rhythm here and there. Occasionally there are drum hits that almost have a tropical feel, which I guess given the limitations of the system were the composer's best attempt at a bayou/swamp feel.  Other than those occasional beats, nothing really stands out about the music to me.  Here's a sample of the music from stage one, just listen and you'll hear what I mean about those odd "tropical" sounding drum beats:


Again, it's an okay soundtrack, and a fairly solid bit of music; however, to me at least, it doesn't feel like Konami's best effort.  I know I could pick this out of a "line up" so to speak, but I don't see the music ever making it on to my iPod.

Overall, it was a so-so game back then, and still is today.  Naturally, I really like this game.
"Say what?" you may exclaim. Yeah, it's true, Despite the flaws, the undue punishment the bad guys dish out, the sometimes sluggish moves of Billy--I like this game. Yes, it will always rank in my top games I think of when I think of "Nintendo Hard" games--but in a way, that's its appeal to me now. With so many games both in my collection and specifically, ones that I beat as a kid over the course of a weekend; it's fun to go back and see how I fair against a game that kicked my butt all over the Bayou.  After all, I was just a kid back then. Likely my impatience was working against me and the game was never really that hard at all. Well....some things never change...

I never beat The Adventures of Bayou Billy in the day, and a part of me never expects to do so even as an adult.  I guess that's one way I get to relive my childhood, but not quite the way I expected.
Posted by The Blue Jester at 11:25 AM