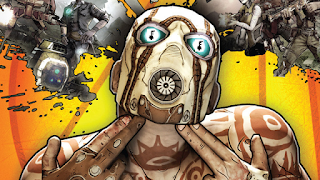 New Year. New songs to hear. And a new system for me to pull songs from!  Yup, this Jester has an Xbox 360 and finally will have a chance to play some of the games he's been missing out on!  Of course there are a bountiful bevy of games to choose from on this system, and at first I wasn't sure where to start.  Yeah, I was somewhat limited because I only received a handful of games with the system when I got it for Christmas, there's  just so much catching up to do, it seemed like a near impossible task to choose what song to start with.

Well, when a game integrates grooving modern day music into its universe this well, it's a natural choice regardless of whether or not I have the game or system it plays on.

I want to kick things off with this year's first Midweek Music Box with a tune from a game I've heard gobs and gobs about when it comes to story line and gameplay.  The graphic style peaked my interest immediately when it first debuted a few years ago.  However, I hadn't heard much about the game in terms of music.

Except, I had heard music from it, or rather, I heard the particular track used in the game itself.
Yeah, yeah, it was in the Arkham City gameplay trailer. Somehow though, the groovy rhythms and soulful humming just never worked for me as commercial fodder for a Batman game. It fits so much more naturally with this game.

Here's the opening cinematic for the cartoonish, pop-up book-like mayhem that is Borderlands 2:

The music itself doesn't kick off until a little after the two and half minute mark, but when it does, not only does the song "Short Change Hero" get used to great effect, but it irrevocably takes this song by The Heavy and makes it it's own.  An opening cut scene with a Mad Max-type vehicle and its occupants get tossed like rags dolls as they are side-swiped by a futuristic train as a music cue? Yeah, that opening rhythm "hits" at just the right moment and captures your attention in a way that cannot be ignored.  Thanks to the music intro choice, you can't help but get sucked into the bizarre universe of Claptrap the robot, maniac Psychos, and the nefarious Handsome Jack.

Are most games better served by their own unique music?  Most of the time I would say yes.  However, here within the Borderlands universe, "Short Change Hero" from The Heavy's album The House That Dirt Built, works beautifully. It captures the heart of the game because as you grow familiar with the game, as you traverse Pandora's wastes blasting your way through mutations; you have to accept one simple fact: There are no good guys on Pandora, not even you. You are not a hero, and Pandora "ain't no place for a hero."

You are in it for the money, for the vault, for the glorious riches that await. You have not a care who gets crushed or let down in the process, because that payday ain't gonna come on its own.

Granted the concept of an anti-hero protagonist is nothing new to games, nor is the use of modern songs.  Other games with anti-heroes, such as the GTA series, make use of modern pop songs with catchy beats and hum-able tunes to help establish the setting or give you an idea of the game's general tone.  However, I would say that you feel the setting of Pandora within "Short Change Hero." It's odd, but inviting. It shucks and jives to its own beat, but invites to dance and play in its universe.  I would be remiss if I didn't include a link to the full song:

Funny, you listen to the build up of the song, you hear the melancholy, funeral-like humming, the slow thump of the drum; all of it feels like it goes with Borderlands 2.  Time to hit up the Box and show why Pandora ain't for heroes.
Posted by The Blue Jester at 10:17 PM