Race the Sun for Wii U Review 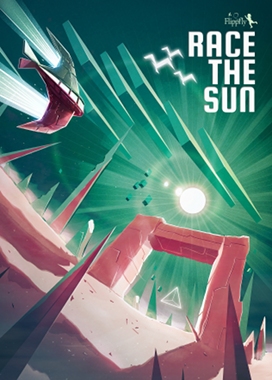 Ah, what a glorious day to race against your inevitable doom. Yes, there's a pervasive undercurrent of doom and death in indie developer FlippFly's unique "runner"/endless flight game, Race the Sun, but it's both funny and welcome.

Funded through a Kickstarter and seeming to continually working on interesting and engaging updates, Race the Sun evokes memories of both Bit.Trip and Star Fox in a unique blend.  Originally available on the PC and other consoles, the game made it's Wii U debut not too long ago. So how did the game port? Should you get yourself ready to Race the Sun? Time's a'wastin', let's get to reviewin'!

In Race the Sun, you navigate an endlessly obstacle filled landscape in your solar powered craft, merrily on your way to no where in particular at all. As the sun sets, your craft runs out of speed and power, and charges towards the inevitable crashing explosion filled doom that awaits.  There are various power ups you can collect, some will increase your multiplier leading to higher scores, others will give you a one time jump option. Perhaps the most useful power up though comes in the form of the "sun-extender" icon, which briefly pauses the setting sun, and even rolls it back a few seconds.  Obviously, the best "sun races" you can hope to have will involve grabbing the sun extender power-up as many times as possible, but be sure to pick up the score multiplier icons if you are looking to pump that score as high as possible before you and your craft explode into dust and debris.

Of course, the whole game would fall apart if the control was anything other than tight, and I'm pleased to say that it has the responsiveness and fluidity needed to make a fast flight game like this work. Anything less and you'd find yourself tossing the controller down in frustration after only a few attempts.  However, thanks to the tight controls I found myself trying again and again to get as far as I could. There are no real endings per-se in Race the Sun, but there are plenty of goals and unlockable content for you to find such as number of barrel rolls done before crashing or obstacles hit along the way without dying.

As I mentioned before, the game evokes feelings of Star Fox, but I should say that it encompasses bot the feel of the original SNES game and the 64 version. The polygons really make me think of the SNES version, but the speed at which things zoom by makes me feel like I'm playing a more souped up version.  That said, the landscape offers little in the way of what might be called "eye-popping" effects, instead relying on a simpler style to help set the tone.

I should bring special attention to the overall color scheme of the game, which, from what you can see in the image above, mostly consists of shades of grey and white. Certainly they could have infused the game with more color, but somehow I don't think it would fit with the game and the designers knew that. This way you really appreciate the splashes of color when they do appear, and it makes the setting sun effect all the more stark and powerful.

There are pleasant chimes that sound any time you pick up an item like a jump icon or light extender, other than that the only sound you can expect to hear is the thunderous explosion as your ship explodes when you hit something. Kinda left wishing there were more to it, but other than plane swooshes I'm not sure what. I guess I wish there was a bit more here.

When it comes to the music for Race the Sun, it features a nice blend of soothing tunes and fast rhythm; it definitely captures the spirit of the game.  Maybe I would play it in the background while editing something or working on a writing project--much like I am doing now!  Not all the tracks were my cup of tea though, but the first level in particular does a fantastic job of pulling you into the world of the game and makes the prospect of playing over and over again a pleasant one.  Here's a sampling of some of the music you get to hear in the game:

I can't wrap this review without taking a moment to mention an interesting feature of Race the Sun: the game world does not stay consistent from day to day.  Each actual, real time day, the game world gets rearranged. Kinda a nifty little trick and I'm still debating if I like this as a feature or not. Part of me wants to get to learn a course, have a chance to anticipate what's coming and plan.  I guess that's possible if I dive in and commit to a couple of hours each time I were to play this game. However, while I appreciate what Flippfly was doing, I find myself wanting a little more permanence.

Lastly I wish the sound and graphic design were a little bit more polished. For the graphics, not that I expect high-level graphics all the time or necessarily need them, just there were times when the polygon charm wore off and I wished the ship looked like Gamecube quality instead of early N64. As far as sound goes, I wish I could hear the woosh of the solar sailor as I pass by objects or some other object on screen making noise. Not that I have to have a world of noise to live in for a game to work--just the sounds felt a little too sparse at times.

Overall, it wasn't a bad little buy from the eShop, and if you're into points based gaming and trying for top spots on leaderboards, it's probably right up your alley.  It may not have a whole heckuva lot going on graphically, but with ever resetting worlds, a decent set of unlockable features, and soundtrack that makes the time fly by--so to speak--I'd recommend snagging this game and prepare to spend hours chasing the sun.