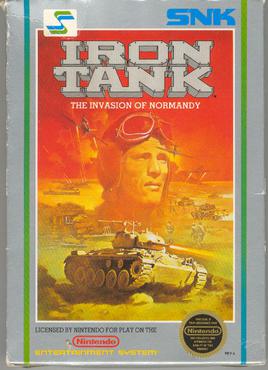 Kinda funny that a number of games on the NES involved WWII. Whether it was Capcom's 1942 or 1943 or SNK's Iron Tank, there was something both compelling and fun about playing as a WWII vet. Maybe it was because of how clear the line was between good and evil. Fascism vs. Freedom, Allies vs. the Axis Powers. Good controls vs. confusing ones....Well, enough digression into history--let's play a video game!


I was a kid and as such I understood the basic fun of the game back then and still do today: Battling foes in a tank seems like a fun time, especially when you can plow over enemies foolish enough to run at you without benefit of a tank, their uniform their only means of cover. C'mon guys! In a battle between a 20-ton iron death machine and wool, who did you think would win? Especially since I get power ups for running over you. I mean seriously, this only works for me.  Kidding aside, rolling along and rolling over enemy soldiers never grows old in the game, and it kinda makes it a shame when enemy tanks show up and put the kibosh on your whole, "Plow'em into the ground" strategy.  You can shoot a machine gun and have a variety of tank-shell power ups to use when fighting baddies, but really, did I mention the running over Nazi's thing?

In case you hadn't guesses, you're playing an overhead tank shooter game where you, and you alone are storming Normandy. Yup, the rest of the army just couldn't be bothered to show up in this version of D Day. So it's all up to you to take the beach, wipe out the Nazis, and save the world.

Anywho, although you can fire on bad guys and the power ups are interesting, I never really got used to the way you operate the tank. Pressing the "A" button shoots the machine gun, pressing "B" launches a missile, but ALSO controls what direction your turret faces. Now, this really has some advantages when you've got a slew of enemies attacking up front and want to have a bit of a rearguard. However, I felt like I constantly had to remind myself how to control the turret so it wouldn't fire uselessly into the bushes or keeping firing at an already dead enemy. Not that it's terrible or can't be learned, just the curve feels a bit steep. I guess as a kid, renting this game felt like a steep curve then and it does now as I STILL don't have a copy of the instructions in front of me. I mean, goofing around with it a bit helps you learn well enough, but sometimes trying to get to know the control scheme of a NES game while Nazi's are shooting at you feels like a bit much.

Let me take a second to point to something that I really do like about the game right off the bat, and that's the music from the game:

I don't know about you, but music like this sure puts me in the mood to fight Nazi's and kick all sorts of butt in WWII.  You just gotta love the pattering snare drum beat that always seems to appear in games like this. Not only does it make the game have an underlining military feel, but accompanied by the various synthesizer crescendos, the whole thing feels like parade drill, on overdrive, in the 80's.  More specifically, an action adventure version of how WWII would have played out. I love bombastic soundtracks like this because not only do get you in the mood for the game, but they make you feel like you're playing a console version of an 80's action flick.  Tell me you can't imagine your character as some brawny muscle man with a thick accent and the capability of wielding a machine gun the size of a redwood.

I wanted to like this game a bit more when I popped it in for review, and honestly I had such a migraine this past Friday (part of the reason the review is up later) I thought it was effecting my enjoyment of playing Iron Tank. Sadly, even crushing Nazi's under tank tread can grow old. After dying over and over and over again, I found myself not so much thrown into the action as I was just trying to learn enemy patterns so that I could progress a bit further. At first I thought the game was Nintendo hard because of this. In fact, I don't remember if I made it that far playing it as a kid seeing as I likely mistook the game as one of those infamously hard games. Nope, it's just pattern recognition. Playing, dying, and repeating until you eventually reach the end.

Of course, I still found it a bit fun to play, and not just because the music was awesome (and still is).  Rather, it's because this time, as an adult, I had learned to patiently plug along. Not that I didn't memorize patterns back in the day, just that sometimes beating a game like this took greater degrees of patience then my nine year old self was willing to put up with. It almost makes me wish that as a kid I wouldn't have gotten frustrated with it so quickly.