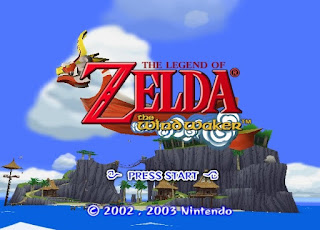 Classic Music from an Epic Game

Time traverse the high seas!  Can you feel the wind in your face, the palpable excitement in the air?
Continuing with a Legend of Zelda-themed week, let's talk about The Legend of Zelda: The Wind Waker.  I love this soundtrack from start to finish, but let me single out three of my all time favorite soundtracks from this game:

First I want to talk a little about the Intro Music. What a fitting way to start this Midweek Music Box, right?:

I guess it's time to confess something: As much as I like the Intro Music for Ocarina of Time and Majora's Mask, it just hasn't stuck with me the way the rest of those games' music has.  Ocarina of Time has so many iconic tracks , and "Final Hours" from Majora's Mask still gives me chills. Yet...Something about the Intro Music from Wind Waker has stuck with me over the years. Whereas the others had a more somber tone, this tune felt so...jubilant. I truly felt like Link was not only destined for adventure, but he'll have fun along the way. Not that I wasn't having fun before, but Link always seemed so grim.  This time Link actually might have a bit of fun along the way, I guess being a kid helps.The simple drum beat, a whistle that has an organic quality about--as if you can image the notes piping out from a hand carved flute, and a fiddle merrily plucked.  Perhaps that fiddle alone imbues the tune with such joy.

Nothing like the spray of the ocean in your face, the smell of salt in the air, and the cry of seagulls to get an adventure going!  And admittedly, it takes a little while to get your true adventure going enough to the point you actually hear this particular tune, arguably the most iconic theme of LoZ: The Wind Waker.


Each dip and crescendo of the strings makes it feel as if the composers found a way to capture the sound of ocean waves within music. The trumpet calls are perfect, the use of strings is perfect--can you tell that this song is in my top three favorite Legend of Zelda tunes of all time? Of course I'm directing you to a ten hour version of the song! I would say the only way I end up growing tired of it before the 10 hour mark is when my heart can no longer take pining for a real-life ocean adventure that never seems to come. (Usually that only happens around the 9 hour, 59 minute mark.)

Short and to the point, this buoyant little melody doesn't last that long, but sure packs the punch it needs to:
Boss Clear Fanfare

Now, I think it's fair to say pretty much all Zelda games have Boss Clear or Boss Defeated music that truly makes you feel as if you've accomplished something. But to me, they always have such a serious undertone that I merely nod my head approvingly after the win. Like a parent saying, "Well done son. Now hurry on to the next quest, the next dungeon, no time for dilly-dallying." Let me give a quick example from Ocarina of Time so you can hear what I mean:

Kettle drums resound, a cymbal clashes, digit string instruments play, followed by a kettle drum roll and final, epic cymbal clash.  Great stuff for sure, but still a bit on the darker side. Adventurin' is serious stuff ya know.  Then here's the Boss Clear Fanfare again from Wind Waker:


What starts off sounding as serious as the Boss Clear tunes of old transitions into what you might almost consider a joyous, celebratory song. How appropriate that the kid/cartoon link jumps and hops for joy.  He's not only excited at having survived, he's giddy at having accomplished so much. The celebratory nature of the tune is so infectious, I almost feel like punching the air in victory when I defeat an enemy.

I have written more stories, finished more creative works, and plowed through more difficult sessions of cleaning thanks to the LoZ: Wind Waker soundtrack.  I think the only that comes close to this is the 10 hour loop of Daft Punk's "Around the World."  I love every inch of this sound track. From the simple, quick tunes that announce you've found a piece of heart to the songs that help establish the setting of a particular dungeon or character interaction--there's just to much music to love here.  So why not give the whole soundtrack a listen?

Pretty fantastic stuff and a worthy entry into the 30 years and counting that Legend of Zelda has been with us.