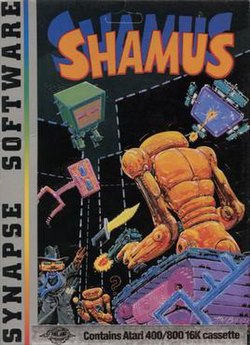 Sometimes you don't need a full blown orchestra to convey a game's tone.  Sometimes you don't need NES chip tunes to get your skin crawling. For me, sometimes all you need are two or three notes to flood my mind with childhood memories of panic and sheer terror.  Heck, hearing the musical cues I'm about to talk about gives me the willies to this day.

Nope, not here to talk about the theme to Shamus for the Atari 800.  Well, not entirely.  Don't get me wrong though, I love the version of the Alfred Hitchcock Presents Theme that plays at the intro. It was pretty impressive back then, and it still impresses me today. I guess it still holds up as one of my favorite versions of the song. That said here is the original Alfred Hitchcock Presents Theme from the original show:

It's a great tune, has a bit of mystery and intrigue in it, and it was perfect for ol' Alfred Hitchcock's show.  Heck, it stands up on it's own whether in 8-bit form or otherwise. I like hearing variations on classic tunes and this was no exception.  How ever great it was to hear the tune getting chip tuned the heck out of it, it's not the theme that comes to my mind when I think of the game Shamus.  What I am going to talk about really isn't a theme, but more of a music cue like I mentioned before. Every time I heard it as a kid my heart would race and I'd run my character to the exit or actually just ram my guy into a wall to kill him off so I didn't have to see what would follow.  Cast your eyes on the horror:

You see him? There he is!  The hopping Devil himself!  The Shadow!!! 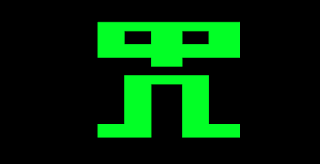 Oh, okay, fine. If you aren't terrified, clearly you never played this game as a kid.  I know this little guy seems to do little in the way of "heart-pounding-terror" one might expect. But I was only about five when my parents got this game and it scared me half to death. Not only were you navigating odd, seemingly endless corridors, danger around every corner--but if you took too long in a room, just a few moments, the Shadow would come pouncing out from one of the corners of the screen and try to murder you. What really sold that fear though; what really sent me into a panic were those few, simple little notes that would play before he hoped out.  Take watch and listen to what I mean:

It was only a few notes to clue you into the fact some mad, hopping beast was about to jump down your throat, but that's all it took for me to nearly burst into tears from fright.  Hey, I was five at the time and the concept of a monster running at you from out of nowhere was a very real possibility back then. Monsters were plentiful back then, lurking under every bed and in every closet. Having such an idea reinforced by a video game only made it worse.  I think my parents may have even kept me from playing Shamus unless they were around, such was my level of fright. It didn't keep me from wanting to play though. I was ready for a scare, oh, okay. So I wasn't ready.

Okay, maybe through the lens of time the scare doesn't seem to hold up. Maybe, just maybe, those few notes that announce that you've dallied a little too long and might be toast don't seem as frightening now when placed up against games with hordes of zombie themed games, jump-scares like Five Night's at Freddies, or even your average slightly spooky flash game.

But by golly does it still creep me out. So who needs the rest of those things and whatever soundtracks they might offer when just a couple of notes can transport me back to the mid-80's and help me to remember, really remember, what it was like to be frightened as a child.