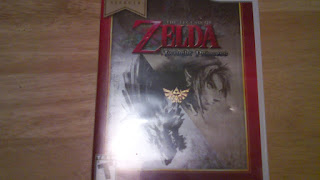 A copy of a game I haven't beaten...yet

...but there's a certain point that has hung me up nearly every time that I play Twilight Princess.  Even after I pass that certain point, I feel annoyance at it's existence.  Yes, with utmost clarity I can narrow down my annoyance to one particular point: Time to feed a stupid cat...

Yup, that moment right at the beginning of the game where you need to go fishing to lure a cat, to get it steal your fish and run home, to make the owner happy the cat has returned, so that she'll sell you a necessary item.  It was as tedious a side quest as one can think of in my opinion, and it happened right off the bat. What's worse, it was a side quest that I likely would have skipped given the choice.

Now don't get me wrong, I realize side quests have a long and glorious tradition within the Legend of Zelda universe. I like doing them most of the time, but admit I haven't completed every single one for every single game. Although getting a fully loaded set of hearts makes you feel like you could take Ganon down in one stroke; I just found myself eventually wanting to just beat the game and skipping some hunts and side quests.  So, imagine my frustration when I find the rescue of princess Zelda, the defeat of Ganon, the very salvation of Hyrule itself...hinges on you being able to catch a fish and feed a cat at the beginning of the game.

Now, to be fair, in Ocarina of Time, you have to do a few side quest-esque things before you can go inside the Deku tree. However, those side quests both functioned to get you the sword and a shield, and they also provided you an opportunity to learn how to control your sword and do some basic blocking.  Likewise in Majora's Mask, you have to do a series of side quests before you get to the main task of freeing yourself from the "Terrible fate" of imprisonment in deku scrub form. However, you aren't just sent running around pointlessly grabbing moon tears and shrub contracts for nothing. Majora's Mask is teaching you a bit of the core of the game play and mechanics as well, specifically that of time management and task fulfillment within the game's three day cycle. These side quests were well crafted and cleverly integrated into the game both in terms of function and storytelling.

So what does feeding a cat have to do with learning core game play?  Does this cat tie in later in the game?  Do you and Ganon engage in an epic fish-off for the fate of Hyrule?

You just putz around a fishing hole like a retiree while trying to satisfy some stupid cat's afternoon munchies.  I love the Legend of Zelda games, but this was ridiculous. It brought the game to a screeching halt in terms of both action and story flow.  It took too long to figure out the right way to fish, the right fish to catch, and where to stand so as to trigger the "event" of the cat standing nearby and stealing said fish.  I'm not sure if that's because I always played it on the Wii and such slow plotting doesn't happen on the Gamecube version--my assumption is that the game is pretty much the same though.

I did play the game past catching the fish and feeding the cat.  But the damage was already done. I had gotten so bored with the game before things had a chance to ramp up, that I felt like I was plodding along, not enjoying the game as much as I would have had I not gotten stuck doing menial work so early on. I own the game, but I actually wished a few times that I had only rented it over the weekend, such was my annoyance and dissatisfaction.

Naturally, I can't wait for the HD version to be released.

Yup, you read that part right. I can't wait. Despite the frustration, despite sometimes wishing it was just another Friday night rental; I'm a long time Legend of Zelda fan at heart and love everything about the story line and series. I'm not just looking forward to updated graphics or how great the soundtrack will sound in HD, or even Amiibo functionality (although those are definitely pluses). I'm looking forward to the opportunity to get back into this game from a fresh, but familiar perspective. I want to beat this game. I want to see the ending.  The world created in the Legend of Zelda series is so engaging, so fun, so well written that I love returning to it time and time again.  It's like a careworn novel I want to read again until the pages start to fall out, but want to read once more.

Whether the old frustrations will kick in, I'm not sure, but one thing is for sure. After 30 years of Legend of Zelda games, it still feels great to rescue Zelda and defeat Ganon; becoming not only another person who beat the game, but the hero of Hyrule.